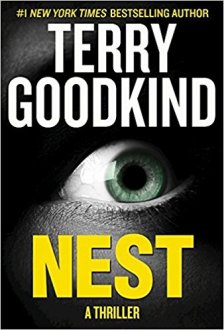 I was sent a copy of this book in exchange for an honest review in November last year, but I’ve only just got to reading it! Despite being on a short break from blogging, any books I am sent to review I will be posting reviews of as and when I get to reading them. I was excited to read Nest because the concept sounded great, and I wanted to start the year off with an exciting thriller! I had read good and bad reviews, so I just decided I would push them away and make what I wanted out of it.

Below is my review, plus a sneaky peak at the front cover and description and places to buy:

Kate Bishop thought she was an ordinary woman living and working in Chicago. But when she unexpectedly finds herself in the middle of a police investigation into a brutal murder, Kate makes a shocking discovery: she has the ability to identify killers just by looking into their eyes.

Trying to grasp the implications of this revelation, Kate is drawn deep into a world of terror. She is tracked down by Jack Raines, a mysterious author with shadowy connections to those who share her ability. He tells Kate that her unique vision also makes her a target, and only he can help her.

Now, hot on Jack and Kate’s heels are a force of super-predators, vicious and bloodthirsty killers who will stop at nothing until Kate is dead. But even as she fights for her life, Kate still isn’t sure if Jack is really her salvation, or another killer coming to slaughter her.

An explosive mix of action and suspense, Nest is a landmark new novel from worldwide bestselling author Terry Goodkind, and a complete reinvention of the contemporary thriller. Travel with Goodkind on a dangerous journey to the back alleys of the darknet, to the darkest corners of our minds, and to the very origins of what it is to be human.

Nest is a thriller novel, bordering on horror, set in Chicago. The book follows Kate Bishop after the murder of her brother, when she finds out she has a special ability to identify a killer by looking into their eyes. The story takes the reader on a journey through how she comes to terms with this ability, and with this, discovers the evil lurking everywhere around her, impossible to escape.

She meets Jack Raines, and author specialising in helping people with Kate’s particular ability in identifying evil and helping the world understand evil in a way they never thought about it before. This book will keep you up at night, even hours after you have closed the book.

There was so much more to this book than I was expecting, yet I still have mixed emotions about it. There was so many good parts that made the book inexplicably thrilling, but other times when the writing was not as good, and the detail went into unnecessary depth. The events in the book were in no way predictable; there was a lot I didn’t see coming, but also parts of the book that didn’t really need to be there, especially not to the extent that they were, to aid the understand of the overall book.

The ending was certainly climactic, almost ending on a cliffhanger that makes me think there should be something more to come. Not necessarily in the form of a full book, but a novella could be appropriate to tie things up a bit. The pacing was unusual, I think, because of the very in depth descriptions. There were extremely tense and fast paced thrilling points, which could be followed by some dull explanations that in the end could have been condensed down into half the amount of pages they took.

Don’t get me wrong, there were many thrilling points that really had me hooked, but other parts of the book that let the overall suspense of the novel down a little.

Jack’s character was extremely interesting and the way his character was built up was amazing, so credit to Goodkind for character development! The storyline was a little bit far fetched, even for a thriller, but the characters remained feeling very real to me as I read the book.

I was definitely kept guessing, especially after the major plot point about half way through the book that completely through me off and had me thinking what an earth could happen now! I don’t think I could pick out a favourite part of the book, because while the book was thrilling and somewhat suspenseful, there were points when the writing was a bit haphazard, and also some extremely graphic detailing that planted some horrifying images in my mind that I unfortunately won’t be forgetting soon enough.

It’s all very well writing and/or reading a thriller, but sometimes descriptions can be taken a bit too far for the readers liking, especially when not pre-warned! I was closes to crying a certain points for varying reasons, mostly shock and horror.

Lastly, one quality that did strike me as unusual for a thriller is how much I learned about things from it. Usually a thriller is focused on a  particular case that is then hopefully solved in the end, but this book gave so much more in the way people look at the world and what people know about the lurking in their surroundings. It opened my eyes to some things that I never considered and gave me things to think about as I read.

I would recommend reading Nest, not highly, but if you are looking for a thriller and don’t mind some graphic scenes then this might be for you. I would urge you to battle through the parts that drag on because it is worth it in the end, but that’s one of the only thing that brought this book rating down for me.

Guest review contributed by Book Muffin. This blogger loves to promote conversation around the topic of books. With regular updates, many more book reviews will follow. In its world, a cup of tea should come with every book.