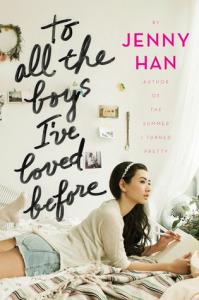 Title: To All the Boys I’ve Loved Before

“Love is scary: it changes; it can go away. That’s the part of the risk. I don’t want to be scared anymore.”

TATBILB was The Literary Lion’s February BOTM. It’s the first Jenny Han book I have read, as well as completely out of my comfort zone. I usually shy away from fluffy, YA contemporary for a bit of magic and a lot of faeries.

But I’m certainly not mad I read this one. The plot was cute and was a nice weekend read. I didn’t know exactly what this book was about going into it, other than a romance. I enjoyed the little bit of mystery on how her letters got sent out and cringed at the reactions from the boys she had to deal with. I certainly could not handle the back lash from secret letters like that getting out.

The love story was easy to follow and to get behind. You could predict where it was going and you wanted them to end up together. It could have easily turned into a love triangle, which probably would have annoyed me, but I liked that the strong family dynamic got in the way of that.

You don’t usually see a family dynamic like Han has created in TATBILB, and it’s refreshing. I think it shows that you can have a story about teenagers without family drama (though this book doesn’t completely leave it out, sisters will always fight).

I did have a little bit of hard time getting into this book. I found Lara Jean to come off as much younger than she was. It wasn’t until the book mentioned high school that I realized she wasn’t closer to her youngest sister Kitty’s age.

After I realized she was older, I found Lara Jean to be a little annoying and immature. But once the story started moving a long she really came out of her comfort zone and you start to relate a little more to why she is so naïve. I appreciated not liking her in the beginning, because it gave her character depth, which I was afraid she was lacking in the beginning of the book.

I think Peter was also a strong character. He was a smart ass, but you could feel for him when it came to the way his ex-girlfriend treated him. Lara Jean had her thoughts about him being an ass and he changed her mind, as well as mine, and I always love when a character can change my opinion.

Overall, To All The Boys I’ve Loved Before was a great for a bit of light reading. I enjoyed most of the book, especially the second half.

It did end with a small cliff hanger, one that you could leave it be or pick up the second book and verify where you think the story is going. I probably won’t be picking up the second book, just because it’s not my kind of story, but if you like YA contemporary and romance, then I definitely recommend it. Jenny Han is a beautiful, whimsical writer, and I don’t regret reading this book at all.

You can find To All the Boys I’ve Loved Before here.

Guest review contributed by Fictional Living. Ashley provides reviews, recommendations, and soon to include more bookish writing. Also coming up are features of short story fiction writers once a week for a new blog series.