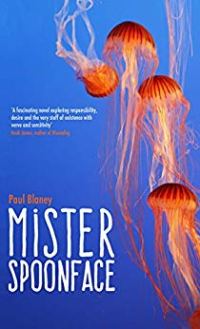 Fred Pooley has returned to London after six years in Hong Kong. He has worked hard and saved a little money, but something is wrong. He can’t settle down, he avoids visiting his mother, and there’s an emptiness inside him.

Petra, a new girlfriend, tries hard to bring Fred out of himself, yet he is irresistibly drawn to his former partner, Sally, and her young daughter. He grows increasingly certain that children are what he needs to fill the void in his life. When he decides to act on that need, he is led imperceptibly into illegality, obsession and self-destruction.

Mr Spoonface can be described as a novel about family and parenthood, and what it means to have neither. Fred is a man whose life has been marked by absences – a physically absent father whom he has never known; an emotionally absent mother who treats him as irredeemably culpable; and of course, an absent child of his own. The interconnections and effects of these absences are complex; Fred finds them hard to comprehend and equally hard to bear.

How can he come to terms with a nothingness that sits inside him like a lead weight – a nothingness that should be filled with things that others appear to take for granted, such as parental acceptance, a supportive family circle and children to love? Fred’s logic goes the way of his emotional life, buckling under his lifelong burden of emptiness.

At least, that is my interpretation of Fred’s crisis. Children who grow up with little or no love in their lives, or whose parents are conflicted with guilt and shame and anger, naturally tend to blame themselves as intrinsically unworthy of affection. Uncertain about the love they inspire, they doubt their own capacity to love others. They may experience failed relationships as adults and may never have children of their own. They certainly make mistakes they would otherwise not have made.

Thus, in its delineation of Fred’s character – the hidden wellsprings of his actions and decisions – Mr Spoonface shows how abnormality masquerading as normality distorts his responses and perceptions. Fred is a lonely man without recourse to the conventional remedies for that condition. His life in Hong Kong sounds isolated and affectless, built around work and daily routines that keep introspection at bay.

Soon, all he can think of when he returns to London is to turn the clock back as if he had never been away, not simply to repeat history but to reinvent it, omitting its errors and its unhappiness. It is the infantile and impossible wish of a man who has failed really to live in the intervening years, and who has not considered the possibility that others have so lived and moved on.

We inhabit Fred’s distorted male psyche so that his thoughts are co-opted, so to speak, as our own. At first, it seems that maybe it is Fred who will be our beacon and guide through a network of tense and unsatisfactory relationships; gradually, however, we come to realize that Fred’s observations are unreliable and his behaviour increasingly erratic. Misrecognition is an overarching theme of the novel.

Mr Spoonface has a cast of strong female characters whose autonomy and intelligence frequently illuminate realities that Fred has failed to glimpse – often because he can’t keep still for long enough. Fred is always on the move, ostensibly to find something of his past, but equally to escape the present and his own unhappy self.

Author Paul Blaney writes direct, uncomplicated prose that does not draw attention to itself. Mr Spoonface tells a dark story laced with humour. It is honest, insightful and, at times, frightening. That’s a winning combination.

This guest review was contributed by Jack Messenger. Jack has been an avid reader since he was a child, and that love of books carried over as he advanced in a career for major publishers as an editor and project manager. You can find his four short story collection here.