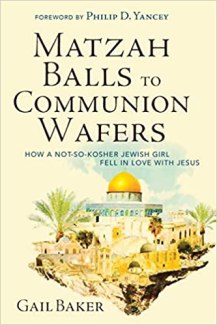 Title: From Matzah Balls to Communion Wafers: How a Not-So Kosher Jewish Girl Fell in Love with Jesus

This book comprises the episodic real-life recollections of a daughter, wife, and mother as she journeys through her liberal Jewish upbringing and subsequent spiritual struggles following her son’s bouts with depression and drug addiction.

The author shares from her heart, discussing her mother’s loving control, her father’s distance, and her own experiences with anti-Semitism. As she tells her story, she elaborates on her parents’ roles in her life and her husband’s agnostic struggles as she became increasingly spiritual, first in the Jewish tradition and then slowly but surely becoming a Christian.

No assumption is made regarding the readers’ own spiritual experiences, and the author discusses Christian baptism, salvation, and Jewish customs with equal levels of elaboration, though, given her own conversion, Christian concepts do seem to be discussed more.

The book isn’t so much about what made the author convert as about why she converted, emotionally. It dwells on what led up to the conversion and what happened afterward, creating an account of her spiritual struggles before and after more than elaborating the moment itself. And the author retains her Jewish identity and her liberal viewpoints, even after conversion, which causes some of the cross-cultural challenges she faces.

The author lets readers experience the emotional progression of her life and her relationships much as she did, where one doesn’t have all the answers. Thus, she doesn’t explain what led to her son’s struggles until late in the book, just as she, herself, didn’t know until he was grown up.

The book is thoughtful and reflective but employs a steady stream of psychological terms, no doubt the result of a life spent taking her son to therapy and later undergoing therapy herself. The writing is candid but can be vague, the artistic flow of the narration complicating the emotional issue of the moment, to where readers may be at a bit of a loss as to what exactly is being discussed.

The state of the formatting and punctuation doesn’t help in this respect, as further editing polish would definitely help smooth over some of the confusion. Most of the time, it’s unclear whether the poems included in the text are meant to be structured as they are or if they should’ve reflected a more traditional arrangement, but they all convey the emotional feelings of the moment quite well.

Though spiritual, the author takes a very broad view of God and salvation, and the writing is free from any spiritual “call-to-action” speeches that readers might expect from a book that discusses how another person “fell in love with Jesus.” Yet the memoir accurately reveals her personal tale without dwelling on any kind of extrapolation as to why someone else might need to take a similar step (though it is clear what the author believes, and readers are welcome to make any private comparisons they wish).

Poetic and flavorful, this memoir will appeal to those curious about the spiritual lives of others. Jews, Christians, and agnostics alike can all find something of interest in the personal struggles, told with such humor, goodwill, and artistic candor.