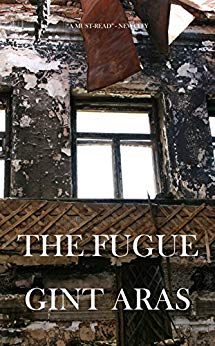 While reading Gint Aras’s novel The Fugue the image that came to my mind was not of an eternal golden braid, but of a broken mirror, cracked and fragmented, each tiny slither reflecting a different aspect of a multifaceted narrative. It’s an image of stasis, of everything at once, eternally present, blindingly coeval.

And it turns out that this image is not entirely inappropriate, for the novel features mirrors of more or less importance, and characters who inhabit the present and the past simultaneously, and whose lives are splintered beyond endurance and yet who, for the most part, continue to endure.

The Fugue is set in Cicero, a suburb of Chicago, Illinois, but its geographical and emotional roots are elsewhere – in the Ukraine, Lithuania, Russia and Poland, Scandinavia and Mexico – from where many of the town’s inhabitants have departed, often as refugees. Those who have fled the old world have brought their traumas with them, bequeathing them to their children and their children’s children. The novel opens with a primal scene of war, fear and concealment; it concludes with the final, ironic manifestation of that guilt-inducing violence.

The Fugue is thus a novel of paradoxes. Inspired by a notion of the harmonious and contrapuntal progression of musical voices through time, it is equally a story about being stuck in someone else’s nightmare. An epic saga of family lives and losses, it is also a chamber piece with surprisingly few characters. Located squarely in Cicero, its moral implications ripple outwards to cover the entire world. I could not help remembering that faire fugue, in French, means to run away. Some of the characters in the novel have run as far away from themselves as they can possibly get.

‘If we had a keen vision and feeling of all ordinary human life, it would be like hearing the grass grow and the squirrel’s heart beat, and we should die of that roar which lies on the other side of silence.’ George Eliot’s astonishing insight, and her attention to the fine-grained textures of daily life, are echoed distantly in Aras’s descriptions of material objects, city streets, and the implications of seemingly innocuous activities such as sharpening a pencil.

Yuri Dilienko, perhaps the main character in a novel many of whose personages could lay claim to that distinction, straddles the boundary between the deafening roar of which Eliot writes and its countervailing silence.

Released from a lengthy prison term for murdering his parents, Yuri lives precariously on the impoverished edge of the town’s decaying infrastructure, devoting himself largely to the sculpting of tortured and twisted figures from the scrap metal he scavenges from littered streets and vacant lots. Art, for Yuri, and for the stalled but gifted composer Lars Jorgenson, is a double-edged sword that cuts through to the truth otherwise concealed by the need for forgetting, yet allows anguish and terror to pour out from the ghastly wounds it inflicts.

Yuri may or may not be guilty of parricide (the truth is only partially revealed by novel’s end), but in any event he cannot divest himself of his parents’ presence, for the temporal jump-cuts that incise the storyline ensure that Bronza and Gaja Dilienko remain vividly alive. Indeed, it is this quality of aliveness in all the characters – the Jorgensons, Uncle Benny, Reikel the meat butcher and landlord, Monsignor Kilba and Father Cruz – that constitutes the novel’s principal achievement.

It is a rare thing always and everywhere to be totally convinced by the reality of fictional personalities, so it is to the great merit of Gint  Aras that he succeeds effortlessly in this respect.

The troubled people whose paths interweave in The Fugue are rarely predictable and seldom consistent. Readers of the novel will find their affections and assessments changing with time and circumstance, so that Gaja, for instance, is at one moment angel, the next demon. Having just seen the excellent film Spotlight, I feared the worst of Kilba and Cruz, who seemed all set up to be monsters, but my expectations were confounded and they, too, develop in interesting ways, while their domestic arrangements and private behaviour are described with documentary-like precision.

Yet it is here that problems might arise for some readers. For me, the novel’s delight in the minutiae of quotidian life – its power to immerse us therein – is both its glory and its Achilles’ heel. As details accrue, as scene follows scene, always intersected by the cross-cutting fault lines of various pasts, one begins to wish for a little more forward momentum, an obvious sign of progression, the unconditional gift of a few significant events.

The Fugue has apparently reminded other readers of Tolstoy’s family sagas – a comparison which is unfair both to Mr Aras and Count Leo, whose work never approaches a similar state of suspended animation. To my mind, The Fugue is too long, with too many scenes doing essentially the same thing, too many meetings where issues are left frustratingly unresolved. Once a reader becomes aware of a novel’s coyness in this regard, there is a danger that it becomes alienating or – what is worse – unintentionally amusing. In any case, one must begin to wonder if ultimate revelation can possibly survive such a build-up.

In addition, the structure of a musical fugue is of course meant to be grasped in its entirety in uninterrupted performance. The circumstances of its reception form one of the ways in which music differs from literature: in theory (if not always in practice) we experience music from start to finish in one sitting, while with literature we must be prepared for many interruptions and intermissions, perhaps over weeks. Thus, for me at least, any sense of the fugue as a whole – as a pattern, as an overarching design, as James’s ‘figure in the carpet’ – becomes hopelessly lost and irredeemable.

In my opinion, these are significant flaws in an otherwise accomplished novel that is only occasionally marred by uneven writing. Aras’s prose is unfussy and down to earth, and refreshingly free of pretentions. It does the job intended for it and it does it well. To its great credit, it helps create a world in which the reader is willing to believe.

The author brings to bear immense intelligence and sensitivity, and a refreshing disregard for conventional forms. The Fugue truly is literary fiction concerned with the why of narrative and not the what of plot. It cares about people and what they do to one another. Despite my reservations, I believe this is a novel that should be read and probably re-read. That is a sign of literature at its best.

This guest post was contributed by Jack Messenger. Jack has been an avid reader since he was a child, and that love of books carried over as he advanced in a career for major publishers as an editor and project manager. You can find his four short story collection here.