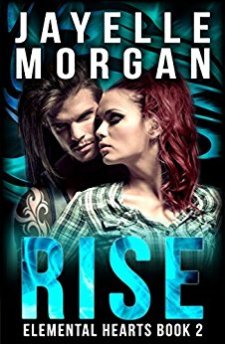 He gave her a night she would never forget…And a child too.

A year ago, Emory met the handsome, mysterious Ajax and threw her good-girl nature aside for one night of passion. She was fine accepting the consequences for her actions, and loves her son more than life itself. She never thought she’d see Ajax again, but now she desperately needs to find him. There’s something wrong with their baby…

She’s the only woman who’s ever taken his breath away.

Ajax never forgot Emory after their one night of passion. But he couldn’t keep her, because she is perfectly, completely human. And he’s not. But when she walks back into his life, it’s for the last reason he expects. Emory says the baby is his, but there’s just one problem: He’s sterile. All elite Elemental Warriors are. Which means she’s playing some kind of dangerous game, and he needs to know what it is.

Ajax is a jerk. A likable jerk, but a smug womanizer. He is intolerable…until Emory. Emory is a no-nonsense kind of person. She doesn’t do one night stands: Except once. With Ajax. They are disgustingly cute together. Emory is a little wishy washy at times about what she wants but the woman it tough! I love their family dynamic with Jackson, their baby, is adorable.

I was happy to see Levi and Brooke back. Plus Walker and Micah. All great supporting characters. I was surprised that Emory didn’t have some sort of friend to give me some perspective on her though.

Much like the last book there is a threat from Chaos. They want Jackson because he is a very powerful Erratic. Furthermore he is very out of control, making mini cyclones every time he gets upset. No wonder Emory was half out of her mind with worry about her very special baby!

Ajax realizes what could happen if his commander finds out. Walker would have to take him back, which means no more playing family with Emory and Jackson. So now he is torn between protecting his family and losing them when he is forced to return home. Will he be able to keep them safe or will he decide to sacrifice himself?

Great writing. There were some errors but most of them were minor and easily overlooked, but some of the flow was off. Also it was a little repetitive at times, mostly Emory’s lamenting and trying to deny her lust, but overall still very enjoyable. The paranormal world and its sexy elementals were as flawless and wonderful as last time. The romance was great and the steamy scenes undeniably sexy. This author always delivers those!

My biggest rub was the ending was anti-climatic. There was all this build up and then it was just over. I felt as though the author took the easy way out. I don’t want to give anything away but after the threat to Emory, it sort of just winds down. The big threat just seemed to be overcome easily.

Fantastic read! If you love paranormal romances this is a must read. A fantastic follow up to Burn!

I received a free copy in exchange for an honest review.

This guest review was contributed by Creating Worlds with Words. This blogger offers book reviews as well as chapter critique exchanges. Occasionally, portions of her writing appear in the feed.

One thought on “Rise – Book Review”