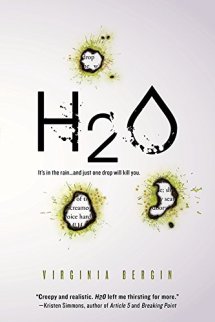 Remember the game we all played as children called “Hot Lava” where you jumped from couch to table to desk to avoid touching the ground aka “the lava”. Sometimes you even got creative and took the couch cushions and pillows with you to get farther through the house. Well, that is this book, except if you touch it, you will die.

H20 is a story about killer rain. Killer rain that comes with no warning. What if one day out of nowhere all the rain… and yes that includes the water from the sink, the water in the toilet, etc. is all poison and just one drop will kill you. Imagine how fast everyone would die without any warning. That is what Ruby has to face in H20 – deadly rain. Deadly water, with no explanation why.

H2o is up there with my favorite books of all times. I would rank this right up there with the Uglies series. Ruby battles an unknown threat, but not like your typically dystopian heroine. Ruby is a normal 15 year old who makes some stupid life-threatening decisions and gets lucky. Throughout the book, Ruby find herself alone, and instead of making great choices on the path to safety, Ruby fumbles her way through life any other 15 year old girl world – completely with a shopping trip where she lootes all the clothes she could never afford before. It is those realistic action of Ruby that makes me love this book so much. Her personality bring life and humor to a very serious situation.

The entire time I was reading this I was thinking on one simple fact, how has Ruby survived, or really anyone survived, without showering this long. And it’s not just about having a shower, I mean when you go camping you don’t shower for days, BUT you usually can jump in a lake or splash water on your face. In Ruby’s case, this is not an option.

Side note: The book mentioned that Ruby had braces. How is she going to get these off now? How is she surviving without a way to brush her teeth. I mean lets be real those who have or have had braces in the past know how terrible it is right after you eat. You get all kinds of hasty stuck up there. So, for this I give Ruby mad props.

Side Side Note: Oh, and later she is KISSING a boy…. with those nasty unbrushed braces. No Thank You.

Side Side Side Note: One entire chapter of this is Ruby simply breaking into houses freeing all the animals (did I mention for some reason animals aren’t effected by this killer rain). So, I think we all need to take a moment and really appreciate Ruby – when the world is ending, she still takes time to free the animals.

Against all odds, Ruby has survived the catastrophic onset of the killer rain. Two weeks after the radio started broadcasting the warning, “It’s in the rain. It’s fatal and there’s no cure,” the drinkable water is running out. Ruby’s left with two options: persevere on her own, or embark on a treacherous journey across the country to find her father-if he’s even still alive.

This guest review was contributed by Girl Plus Book. With a neat magazine style layout, these gals attempt to share their love of books with the world.