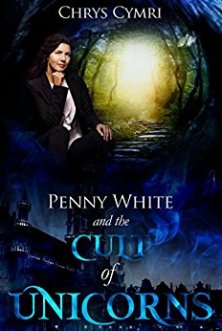 Title: Penny White and the Cult of Unicorns by Chrys Cymri

‘More is the pity, ‘ said the unicorn. ‘Father Penny and I were about to amicably settle our differences. A dragon invading our home vastly complicates matters.’

Five months ago my life was changed forever when I learned about Lloegyr, the sister nation to England on the magical parallel world of Daear. Thrilling rides on Raven, a darkly beautiful search dragon, break up the monotony of my life as the priest of a small village church. Nor are things dull at home, not with a sarcastic gryphon, a snail shark, and my younger brother all sharing my living space. And then there’s Peter, the almost too perfect police inspector who enjoys Doctor Who and single malt whisky as much as I do.

But Lloegyr is facing its own struggles. As various races such as dragons, gryphons, elves, vampires, and harpies flood to the rapidly growing cities, they all trust the unicorns to act as peace makers. But dead humans are turning up in the city of Northampton, with wounds which only a long spiral horn could have made…

Book Review: I greatly enjoyed Penny White and The Temptation of Dragons, so when the author presented me with the opportunity to read and review book two, I jumped at it. And, with a few exceptions, it was every bit as enjoyable as book one. So here’s a closer look.

Narration: 4 out of 5. I still feel that the narration could include more sensory aspects, but it was consistent with Penny’s point of view narration from book one and carried the story forward quite well. She tends to notice who says things and does things more than what things taste like, smell like, or feel like, but there are enough details for me to picture where things are happening, I still feel like we could have just a few more details, now and then. Like how people’s expressions change, beyond a widening of eyes or a flush.

We get lots of details about Penny’s voice, feelings, and actions but she doesn’t seem as observant of those around her, and I think she would be (or that she’d grow into it, at some point, as a result of her new role).

Content: 4 out of 5. This is an area where I felt book two was weaker than book one. There were fewer Penny-and-God interactions which disappointed me, as I thought they were one of the best parts in book one. This might have been the result of how busy Penny was in this story, but it really seemed like she would still be turning to God even as things are going better, as she doesn’t seem like the type who’d only turn to God when she was lonely and missing her husband.

Another content challenge was related to how the plot relies on Penny and her gryphon, Morey, going off and handling things by themselves (especially in the climax), and I didn’t feel this made a lot of sense. When she was first introduced to Lloegyr, yes, she wouldn’t have known what she should or shouldn’t do. But now she’s six months into the position.

Everyone should have briefed her about what to do when it seems some humans might be stumbling upon Lloegyr. She should know the network she’s working with far better than to go off, vigilante-style, and even if she did decide to do this, as it’s very true to her character, she should know enough to at least consider going the “traditional” route.

Finally, I didn’t feel the title was that accurate to the story, as it isn’t about a Cult of Unicorns, really (unlike the Temptation of Dragons, which was really exploring how some Dragons were drawn to humans and vice versa). In this case, it’s about suspecting the very judges of purity that the government of Lloegyr rests upon and finding out what unicorns will and won’t do to protect their world. So it felt like “The Protection of Unicorns” or “The Purity of Unicorns” would be more accurate than a title that suggests the religious worship of unicorns is the focus of the story.

Characters: 4 out of 5. The main characters are some of my favorites in all the Indie published books I’ve read, but the side characters still came off a bit less developed (a different group of side characters this time, but equally lacking great depth). For example, I was glad we got to meet the police inspector’s parents, but I didn’t feel we had enough time with them to get to know them (but some of that could be the many Doctor Who references in their scenes, which I don’t know well enough to completely understand). Once again, the antagonists were excellent, and they and the main characters carried the story forward (along with the excellent world building).

Artwork: Subjective. I thought the cover for the first volume was great and the second is different enough to be distinct but still attractive. I especially like the blue tones, but I couldn’t figure out what the building in the foreground was supposed to be. I thought perhaps a church building, but given that the plot centers on the unicorn’s home (woods), Penny’s home, and cities, I wasn’t sure why the church would appear so prominently.

World-Building: 4 out of 5. Once again, the world building was spectacular. The more I get to know the alternate world, the more believable and consistent it all is, and the only thing I would change is related to the infrastructure of the interworld government, as noted under Content.

I felt there should’ve been more information about Penny’s job and how to handle different problems that arise, as there should be a great deal of structure (and there are hints of as much) to where Penny and Morey should both know, going into the climax, what they should be doing and how they should be handling things instead of feeling like it’s their responsibility to solve it all, by themselves.

Overall Response: 16 out of  20, or 4 overall. If you like thoughtful fantasy that isn’t all about fighting off evil with swords or guns, this is a series you should definitely read. The characters use their wits and work within the system to investigate evil, and the stories are part murder mystery, part fantasy, and all parts delightful.

Check out Penny White and the Cult of Unicorns here.

Guest review contributed by Andrea Lundgren. Andrea’s blog focuses on reading and writing from a writer’s point of view, so the book reviews analyze books across several categories, looking at what worked and didn’t work. This can be especially helpful when reviewing works by indie authors.