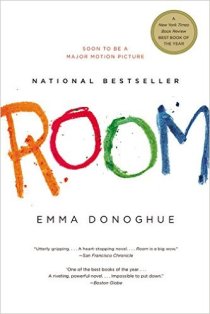 It’s Jack’s birthday and he’s excited about turning five. Jack lives with his Ma in Room, which has a locked door and a skylight, and measures 11 feet by 11 feet. He loves watching TV but he knows that nothing he sees on screen is truly real. Until the day Ma admits that there’s a world outside.

This could have been a very short, almost “typical” book on kidnapping and rape told from Jack’s mothers perspective, but that wouldn’t have been nearly as creative and haunting as this book.

As Jack is the one telling the story, the language is much more simplistic and not grammatically correct so that is definitely something to get used to. He also incredibly naive, to the point it is almost painful. His mother brought him up on the belief that there is nothing outside of this room, and everything they saw on TV was fictional. This was so he didn’t feel as if he was missing out on anything, and that made me feel so terrible for his mother having make that decision.

Their life within the confines of the room is incredibly regimented and as close to normal as his mother could make it, but it’s this routine which makes some aspects of this so much more horrifying. For example, at nine o’clock at night Jack sits in the wardrobe while the kidnapper comes in and, you know, does ‘things’ to Jack’s mother. Jack doesn’t really know what was happening so he just gives these innocent descriptions of what he hears in a way which caused my heart to break for him and his mother.

About half way through the book, Jack does eventually escape the room and his mother is rescued. Jack assimilation to the world outside of the room takes up much more of the book than I expected, but I am glad for that. We get to see how he learns about how the world is so much bigger than he could ever imagine. How he socialises with people other than his mother. And how he accustoms to the un-regimented lifestyle that freedom allows.

Jack’s point of view had an innocence that allowed nothing to be left out. It’s this point that made this book so jarring and brilliant.

This guest review was contributed by Caffeine and Books. This blog contains book reviews, book hauls, book tags…basically a lot of bookish things, all fueled by caffeine.