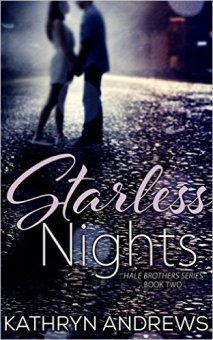 Beau Hale
She said that she was my best friend and then one day she wasn’t. Every day I live with the visible scars, but it’s the invisible ones that hurt the most. They are a constant reminder of everything I’ve lost as well as all the things that I’ll never have.

I should be over this by now, it’s been years, but I can’t escape the memories that haunt me. Everyone around me is moving on with their life, so now I need to do the same. Tennis brought me to Columbia University, and I am quickly proving that I will not let anyone defeat me, past or present. I am in control now. Life has taught me the hard way to remember that. But after all this time, I’m still searching for an answer to the one question that is constantly burning in the back of my mind…why?

Leila Starling
He said that he was my best friend, and then one day he wasn’t. It took one moment to change my entire life. What I thought I knew became a lie and nothing was ever the same. Slowly, I picked up the pieces and focused on what I could control…me. I live in New York City and attend one of the world’s most prestigious fashion and design schools. Day after day, I am getting closer and closer to making my dreams come true. I did this all on my own and no one can ever take it from me. I know my future is bright, even if my heart is destined to stay in the dark. The dull ache that still lingers is my daily reminder to rely on no one but myself. Although, after all this time, I still can’t help but wonder…why?

In Drops of Rain, Beau was the sort character that often stole the show (in a good way), even if the story was not about him. Then, he seemed like a fun kind of guy- carefree, and all smiles. Even though he endured all kinds of abuse on a regular basis, he did not strike me as intense as Drew was.

I guess I was wrong, because in Starless Nights, Beau is all kinds of intense. He is quiet, and his smiles are not as frequent as they were in the other book. His father’s arrest and the events following it have obviously taken their toll on Beau.

Beau’s relationship with Leila is sweet, but frustrating (for lack of a better word). They are so confused, and it’s so obvious to me, and everyone around them that they are just meant to be. It’s such a small thing that caused them to fall apart in the beginning, and now, Leila thinks Beau doesn’t care about her, and Beau thinks Leila does not love him.

The good part is that they eventually decide to overlook the past, and move forward. But then, how easy is it to actually forget the past? Beau and Leila struggle to understand each other’s side of the story, and FINALLY, the truth comes out.

This book made my heart soar (I know, that’s a horrible line). Seeing how Beau and Leila grow in their love for each other is heart warming, to say the least. Leila is a determined person, who is already making a name for herself, and Beau is finding his footing, still getting accustomed to not having to be scared all the time.

We get to catch up with Drew and Ali, and meet some new characters, who make for a great cast in this story. I love that the author included flashbacks: they really helped with my understanding of the story, and how everything came to be as they were.

Like I said (or wrote) earlier on, this story is not all fun and games, like I expected. It’s deep, and filled with emotions- love, pain, anger, and so on. I loved Beau in Drops of Rain, and I like him even more in Starless Nights.

Starless Nights is a one-of-a-kind read. There isn’t much else I can say about it.

By the way, Beau and Drew’s younger brother (Matt) has his own story, and I just know it’s going to be epic.

You can find Starless Nights here.