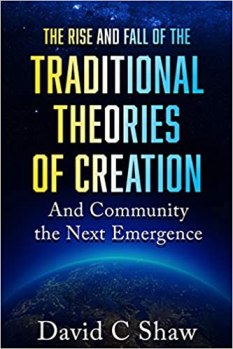 Title: The Rise and Fall of the Traditional Theories of Creation and Community the Next Emergence

The Rise and Fall of the Traditional Theories of Creation and Community the Next Emergence is an essay discussing the evolution of stories about the creation of man from ancient to modern times. The author, David C. Shaw, uses both the ancient Hebrew creation story from the Book of Genesis and ancient Greek creation theories to describe the history of creation as humans understand it today. He then moves on to discuss his theory that community is the next emergence, referencing, analyzing, and providing his thoughts on Harold Morowitz’s work titled, The Emergence of Everything: How the World Became Complex.

In his introduction, Shaw recognizes the significance of the topic of creation, stating that we can’t truly know who we are unless we know where we stand in relation to the act of creation.  He describes both the foundation and fall of the two main creation theories, Hebrew and Greek, both of which stated the heavens were a solid body. Shaw’s recounting of the theories of creation will engage readers with a love for history.

Readers may also be intrigued by Shaw’s take on the evolution of humans’ belief in God. He argues that proof of the heavens as a solid vault, the foundation of both the Hebrew and Greek creation stories up until astrologer Edmund Halley proved it incorrect in 1718, was the main evidence that God existed. Modern understanding of the universe has required humans to shift away from scientific and physical evidence of God to the more intangible.

Although it may take a significant amount of brain power and concentration to grasp the more complex and illusive concepts in Shaw’s book, it is not due to Shaw’s writing but rather to the intangible nature of the subject matter. With a formal and academic writing style, this book will prove to be an enlightening challenge for readers. That being said, Shaw’s connection between the historical evolution of creation stories, the first topic discussed in his book, and his final conclusion that community is the next emergence could be clearer to avoid confusion. Toward the end, it was difficult to understand how the first series of topics supported his final theory.

Through exploration of the stories of creation, David Shaw’s essay will guide readers down an alternate path to answering the age-old question, “Who am I?” In his book, Shaw provides engaging historical recounts of the Hebrew and Greek creation stories and ties them to the idea of the heavens as a solid entity, an ancient but new concept for many readers. Shaw has created a logical, educational, and well-formulated essay to present his alternate theory of community as the next emergence.