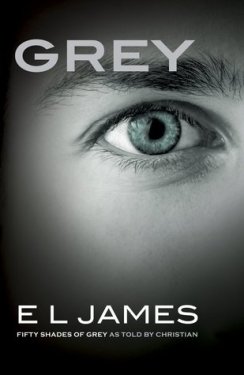 I’ve taken a breath. Got my emotions in check. Put my favourite comfy slippers on. Poured myself a glass of wine and have my kindle and computer at the ready, to write what is probably one of the most important book reviews of my life, well, okay… since the start of our blog launch on June 1st, 2013.

I loved the whole dynamics. Christian, for want of a better word, whipped my ideals into shape and made me realise that there is a real market for the more unconventional…and it sure made me want to delve deeper and embrace I did. From there, this blog was born, so first and foremost, I would l just like to extend a personal Thank you to E.L James for opening a whole new world for me. Not only has it been one hell of a journey, but I’ve met some incredible people along the way.

Grey was an unexpected gift. So many of us in the ‘Pro Fifty Club’ fell in love with Christian’s POV at the end of Fifty Shades Freed, and craved a thirst for more. I certainly did and I can honestly say, as far as male POV rewrites go, Grey did not disappoint in the slightest, in-fact it answered questions, it flayed open a very complex character. One thing that remained clear to me is that regardless of the critics’ views, he is a man of his word. A powerful, headstrong and generous person who commands respect but who isn’t afraid to also give it. A man who puts family, trust and other’s wellbeing above everything else. He takes, but he also understands the word ‘no.’

GREY goes to prove that Christian is no monster, and Ana is far from a wallflower. It is the first book, the makings of an epic love story based on trust, communication and honesty. How many of us can say we have ever felt that connection to someone? He may have singular sexual tastes, but one thing is clear whilst reading his POV, this is Christian’s awakening as he discovers things about himself, and others, and how after knowing he is troubled, realises that he is also respected, and loved by many even if he finds that very hard to accept.

After living his first 4-years in hell, the emotional scars are still very raw. His command for control comes from being a victim of child abuse. The idea of anyone taking that power away from him again is abhorrent. Elena, his ex-Dom gave him an outlet to extricate that fear at fifteen. Love her or hate her, she helped him the only way she knew how, and it seems for a time…it worked.

‘She was a force for good. What I needed. Good God, I’d probably be dead by now if it wasn’t for Elena.’

Something else I learned about Mr Grey is he is very witty. His inner anecdotes had me chuckling out loud. He is gentlemanly, a real professional charmer with a regal manner that made me remember why I fell in love with him in the first place. He has so many redeeming qualities, yet off the back of that he is also impatient, intimidating, ruthless with a dangerous streak that will have the surliest of men cowering. He is the alpha to rival others, and god do I love him for it. No one can say his characterisation doesn’t have layers.

Some may say his command for control is excessive as he lets his deep seated emotions control his sadistic needs but I implore you to rethink that notion. His needs may come from a dark place, but he is a smart man. He may be a Dom and practice the art of sadomasochism, but Ana holds all the cards but it isn’t until later that Ana and Christian come to realise the power she holds over him as he starts to feel something more than attraction. She quite simply turns his world upside down, and he is man enough to recognise it even though the idea scares the hell out of him.

‘What I think you fail to realise is that in Dom/sub relationships, it is the sub who holds all the power. That’s you. I’ll repeat this – you are the one with all the power.’ – Christian Grey

Book review contributed by Perusing Princesses. Along with their book reviews, this blog features monthly authors (and their books) in their spotlight section. Their website’s forecast is sunny and pink with a chance of glitter.