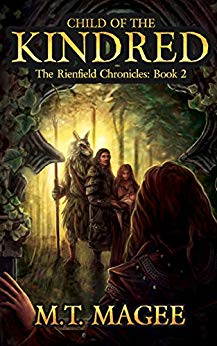 Child of the Kindred: The Rinefield Chronicles: Book 2 – A Romantic Heroic Fantasy Series By M.T. Magee

The award winning romantic heroic fantasy saga continues. Enter the mystical realm of Rinefield, where love, danger, adventure and romance awaits you. Their world is changing and a new era has begun. Princess Laurel finds her kingdom of Gwenlais, torn and shattered from a bloody siege.

Her people now looking to her, to help them rise above the ruin and misery inflicted upon their once peaceful and sheltered realm. Laurel and her beloved Prince Caleb, must find a way to unite their kingdoms, as never before. The enemy from a distant land makes a bold and savage attempt, to thwart the unity of the two kingdoms of Gwenlais and Heathwin.

The odds have never been greater against the realms or the two lovers that hold the kingdoms together. Will their people and their love survive all they have lost? Will new life rise from above the ruins?

A spectacular, rich fantasy at its best!

M.T. Magee has done it again in her second novel in the Rienfield Chronicles, The Child of the Kindred. After reading her first book in the series, The Treasure of Gwenlais, I didn’t think it could get any better-but it did!

In Child of the Kindred, we re-enter the magical realm of Rienfield, where Princess Laurel is being held captive by the savage and merciless, Warrick. Her cherished kingdom of Gwenlais, has been captured, overthrown and plundered by Warrick and his evil army. As time goes by, and blood is being shed, Princess Laurel’s only hope is for her beloved husband, and Prince, Caleb and his men to rescue her and save the kingdom of Gwenlais.

But time is trickling away and the kingdom, as well as, Princess Laurel are in much peril. Will Caleb be able to reach her and save her and the kingdom? Will Princess Laurel and Prince Caleb be able to fight and keep the people safe and bring protection, peace and joy back to both of their kingdoms, Gwenlais and Heathwin? As their breathless love story and adventure continues, readers will be kept in a state of awe, as they passionately strive to unite their kingdoms.

What an adventurous tale M.T. Magee has created in The Child of the Kindred. The beauty of both Gwenlais and Heathwin is a delight for the senses and captivates the reader’s heart and won’t let go.

It is such a delight to read the world M.T. Magee creates, which is inspired by both the beautiful Scottish and Irish old world cultures, including the winsome Gaelic dialect.  Much devoted research went into this great novel.

As Princess Laurel and Prince Caleb’s passionate love story continued, I was drawn in and held captive myself.
The realm of Rienfield is an unimaginable world filled with vivid scenes and colors. This fascinating, beautiful romantic Celtic inspired fantasy saga will sweep you away from reality and launch you into a dream world.

The writing of this beautiful tale is impeccable. It reminds me of J.R.R. Tolkien and The Lord of the Rings, or could it be better? I think so. It is beautifully composed and the imagination put into this story is unbelievable. M.T. Magee is a highly talented original writer.

There is a lot going on in this, rather, long novel. However, the plot is outstanding and flows beautifully- every word is to be savored.

Come fall in love with the heroic characters in the inspiring, magical, realm of Rienfield.

Filled with love, peril, warfare and romance, in Rienfield you will be taken on an adventure of a lifetime. To a magical mystical land far away. All fantasy lovers should read this book. In my opinion, it should become a classic. It is that exceptional and noteworthy.