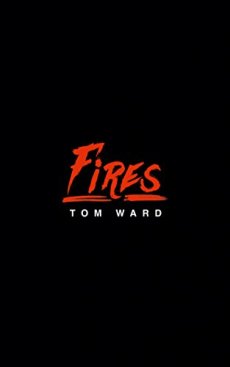 Novel titles are seldom as apt as Tom Ward’s Fires, which follows Guy, a firefighter in a town dominated by its vast steelworks, and Nathan and his friends, teenage arsonists whose lives are otherwise foreclosed by poverty, corruption and ‘the system’. Guy and Nathan’s paths eventually cross in expected and unexpected ways – most of them fiery – in an intermittently compelling narrative suffused with anger and loss.

The unnamed town in Fires is decaying due to neglect and poverty. The rich live in gated communities above the urban sprawl that is filled with abandoned civic buildings and row upon row of boarded houses. Increasingly vociferous and angry protestors march through the streets: there are shady goings-on at the steelworks, and jobs are dwindling. People are frightened. Lives and livelihoods are at risk.

This non-specific scenario is oddly timeless – deliberately so, I believe. In the context of the UK, a town wholly dependent on the production of steel harks back many decades, before the domination of China and elsewhere. Yet the gated communities, vacant tower blocks and fast-food outlets described in Fires sound contemporary. There is little sense of a surrounding nation, and the anonymous town is a self-contained entity that exists in a vacuum suggestive of wider catastrophe: one pictures everywhere else as cloaked in impenetrable night.

There are comparatively few novels devoted to firefighters, so it is interesting that Fires should resonate so strongly with Henry Green’s Caught (1943), which is also an urban tale, this time of the Auxiliary Fire Service during the London Blitz. Caught is similarly pared down: its principal characters are sparely named Pye and Roe (PyeRoemania?), and its narrative trajectory is as grimly inevitable as Fires.

The writing style of Caught is extremely odd: error-strewn and infelicitous sentences that cumulatively become incantatory, hieratic. As one perceptive reader–reviewer has said of Caught, it’s not an enjoyable read, but it feels like a necessary one. He or she might have much the same feeling about Fires.

Stories echo forward and back, and fire itself is a potent and ambiguous cultural metaphor: a warm and caring friend when safely contained; a devil of destruction and pain when it escapes our control.

Whether ignited or fought, fires rage through Fires, consuming property, lives and possibilities. For Guy, dedication to fighting fire has consumed his life; for Nathan and his gang, arson provides a power and freedom, a terrible beauty, rarely experienced in their world of dead-end jobs and dreary routine.

Coincidentally, it’s here that another Green(e) is evoked, for Fires conjures a close cousin to Greeneland, populated by isolated individuals contemplating their past with regret and their future with paralysis. Guy’s feelings of guilt are like those of Rowe (another one) in The Ministry of Fear (1943, again). In addition, the urge to destroy that propels Nathan and his gang is shared by the children in Greene’s short story The Destructors (1954).

Fires is less successful when considered in isolation from its illustrious forebears. In my opinion, it is too long, so that the story seems slackly spun out. And there are just too many fires: by the time I’d reached the sixth or seventh descriptive passage about explosions of flame and falling masonry, it was difficult to feel involved. With some judicious pruning and an injection of momentum, the novel would have felt much more urgent.

Alternatively, if conversations and/or contemplations had been more creative and provocative, the novel would have filled the space available. As it is, the plot outcomes are unexpected but unsurprising. The prose tends to be flat and hurried, with an irritatingly absent comma before the coordinating conjunction then, plus other minor errors.

Despite these problems, much of the novel is strangely compelling. I read it quickly because I was caught up in the ambiguities of time, place and meaning, its principal achievements.

This guest review was contributed by Jack Messenger. Jack has been an avid reader since he was a child, and that love of books carried over as he advanced in a career for major publishers as an editor and project manager. You can find his four short story collection here.