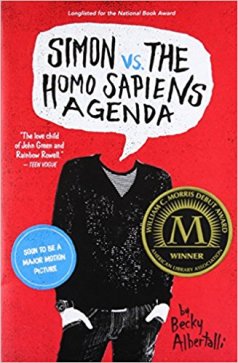 Remember walking down the corridors of your high school and blushing whenever you catch a glimpse of that one cute guy who seems to shine just a little bit brighter than everyone else?

Remember the late night conversations with your friends trying to decipher and construe every conversation and gesture, looking for any hidden meaning or indication that he feels the same way?

Remember your first heartbreak, like when you find out he likes someone else and you comfort yourself with a tub of rocky road ice cream and listen to emo music (Jann Arden in my case)?

These are the kind of memories that this book evokes. It takes you back to a time in your life when every feeling and emotion is magnified (probably because of teenage hormones). It recalls the innocence of first love and I think it captures it perfectly, with just the right amount of self-deprecating humour, sweetness and angst.

Simon Spier is just your average teenager, hoping to get through the drama of high school with his dignity and spirit relatively intact. The main difference between Simon and the rest of his peers is that he’s keeping a secret: Simon is gay. And he doesn’t really know what to do about it until he meets ‘Blue‘ on the school’s social media page. They start a series of email exchanges and get to know each other in the process.

I’ve already mentioned how this book captures the experience of first love so wonderfully, but really, the most beautiful thing about this book is that its about two boys falling in love for the first time. In the middle of getting to know each other and helping each other come to terms with their sexuality, Simon and Blue also fall into the kind of love that almost makes me wish I was a teenager again (key word being almost here!).

This is the kind of book that gives you hope that someday we will live in a world of tolerance and acceptance, where love is love and no one will even give a second glance to two boys holding hands in public. I hope that teenage boys – and girls – out there who are feeling confused and depressed will pick up this book and know that other people are going through the same thing and that things will get better.

If it was possible to die from sweetness overload, I would have done so already. I finished the book and just went “awwww”. I would definitely recommend this book for fans of YA and just for book lovers wanting a feel-good novel to read during the cold winter nights.

This guest post was contributed by Miss Blabbaholic. Her site is about music, fitness, and above all, it’s dedicated to her love of books.

3 thoughts on “Book Review – Simon vs. The Homo Sapiens Agenda”