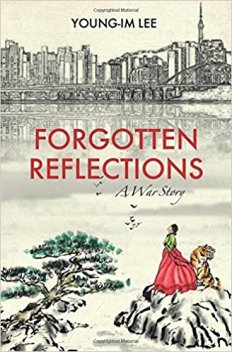 I must admit that I haven’t read much modern Asian fiction, and even less Asian historical fiction, so when I was offered this book, I was excited to read it. When I got a look at how long it was, I admit to second thoughts. I’m glad I stuck with it because it was a great read.

This is two stories in one, the story of Iseul as a girl, and the one of her as a grandmother now suffering from Alzheimer’s and living in assisted care. Her granddaughter starts digging into her grandma’s past when they move her into the care facility. Meanwhile, Iseul herself is remembering her past.

Iseul grew up in a small village in Korea. She barely remembers the Japanese soldiers who roared through her town, killing her mother and many of the villagers. Now Iseul is old enough to help her father with his paper-making business. She attracts the notice of Jung-Soo, son of the local bigwig, and that relationship will shape the rest of her life. She and Jung-Soo become aware that the village has a secret Communist cell and soon war breaks out.

I won’t spoil the rest of the book, but I can say that their paths part, but neither can forget the other one. When they are reunited, everything has changed. Several times with this book, I thought it was so long I was never going to finish, but I just couldn’t give up on it.

Like I said, I’m not familiar with Korean books, and the author says that she was only born in Korea and grew up in the Philippines. But the writing is very different from what I’m used to. Sometimes the narrator (the granddaughter) addresses the reader directly. The way Iseul talked made me laugh too. She’s not like any other MC I’ve read this year, that’s for sure.

I definitely recommend this one. If you’re in the mood for a good long book, this one should be on your list.