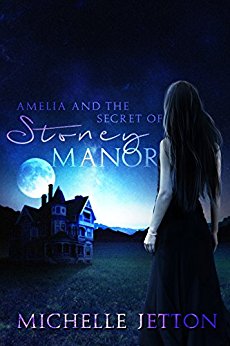 Amelia is truly not your average girl and neither is her story.

Abandoned by her mother at a young age and raised by an overly-protective grandmother, Matilda, Amelia is confined to the grounds of her childhood home, Stoney Manor. Amelia meets Matthew Fairchild, the new boy in town, and quickly becomes infatuated with him. Soon Amelia discovers things aren’t always what they seem in the little town of Cave Spring, Ga.

On her 16th birthday, life as she knows it changes. Her grandmother confesses to her that she and her family are witches and the Darkness is after her for her family’s power. Along with her friend, Luna, she embarks on a journey to discover who she really is.

Can she protect her family from the Darkness? Is maintaining her relationship with her new boyfriend Matthew even possible? Can she uncover her family’s secrets or will they remain in the dark forever?

I really thought I would enjoy this book, especially since the summary looked quite interesting. However, some parts just didn’t appeal to me that made me decide to give Amelia a 3.5. Let me round up this review into two parts for you:

For the most part, I didn’t connect with the characters at all. Their actions were a bit bipolar and I didn’t understand how someone could react that way in reality. Or sometimes, I feel like Matthew and Amelia were overreacting already that all I could do was shake my head. For example:

The morning dragged on until finally it was time for Matthew to arrive. I rushed to the front door to greet him, ready to apologize for the way I acted. I quickly opened it to find him waiting by his truck with a beautiful bouquet of flowers. Tears began to stream down my face as I ran down the steps of the front porch and jumped into his arms, almost making him drop the flowers.

Almost everything was also simply telling instead of showing. I didn’t know what most of the characters looked like, only that Matthew is “handsome” and Amelia is “beautiful” and so on and so forth. Did they have blond hair? Are they tall? Are they fat? Are they scrawny? The book didn’t describe them much at all.

I was also hoping for further explanation as to what Moon Witches were, but unfortunately I was greeted with a chapter where Grandmother Matilda was already finished with explaining it to Amelia. A bit sad, but at least I got to know about some of the characters’ backstories.

I felt a bit “meh” about Amelia and Matthew’s relationship. It was too much of an insta-love that I couldn’t relate to it at all. They’ve only met for two days and they’re already so infatuated with each other? Their ways of showing affection was too forced for me, too. It just wasn’t believable.

The fast pacing wasn’t good for me, either. The time lapse was so quick that I couldn’t even feel anything. Not fear, not affection, not even sadness. I also thought Luna died, but then Diana was suddenly calling for Luna to follow them in the middle of escaping the Darkness. That part definitely confused me.

I loved the individual powers the Moon Witches could have. It was really powerful and could definitely help with the right timing. I could imagine just how much Amelia could do with hers, and I wonder what she really would do with it in the following series. Hopefully, it’s something good to read about.

I’m also a bit curious as to who the Darkness really is. I didn’t really get much of a backstory about him other than the obvious ones mentioned in the book, so I hope he gets even more interesting in the following series.

Grandmother Matilda also piqued my interest. She was the character that I could at least relate to the most. She is smart and caring at the same time, although during the first few chapters I felt a bit weird with all of Amelia’s “Yes, Grandmother” replies that made me feel like Amelia was acting like a robot.

Overall, I did like Amelia and the Secret of Stoney Manor, although I think it could have been better without much of the romance. The chapters that led to the ending were a bit suspenseful, so I hope the sequel will be really good as well. This book is for the ones who like romance (especially the cheesy ones) with some magic and fantasy kicked into it, plus someone evil who wants to, of course, end the main character’s life.

This guest review was contributed by Mara Was Here. Mara Was Here is a book blog that reviews books–mostly YA–and talks about anything bookish, as well as publishing discussion posts and other features.