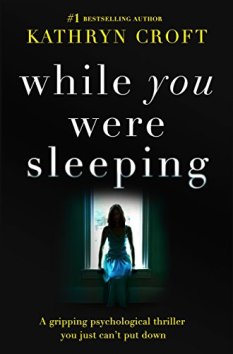 While You Were Sleeping

You wake up to find the man beside you is dead.
He is not your husband. This is not your bed.
What do you do?

But her peace is shattered when she wakes in her neighbour Lee’s bed, with no memory of how she got there or what happened between them.
And worse – he has been stabbed to death.

But as her daughter spirals out of control, and her husband becomes increasingly distant, Tara soon realises that someone in her life knows what really happened to Lee. She must get to the truth before they do.

Tara made a mistake … but will one night cost her everything?

A gripping, shocking psychological thriller, with a twist that will take you by surprise.

Will engross fans of Gone Girl, Behind Closed Doors, and The Girl on the Train.

I received an advance review copy of this book courtesy of Netgalley and Bookouture.

What could be more horrifying than waking up naked in your neighbor’s bed and realizing he’d been brutally murdered while you slept? For Tara Logan, the fear of being found out was as paralyzing as waking up next to a dead man, and having no memory of how she got there, or what happened the night before.

Desperate to keep her terrifying secret, Tara does what she can to find out what the murder investigation has uncovered, if anything. Before long, she finds herself in the midst of her worst nightmare as suspects are questioned, revealing things that could result in the destruction of her family. Her only hope is to find out the identity of the killer—and soon—before she loses everything and everyone she holds dear.

This book has more twists and turns than an old country road. Just when I thought I knew something for certain, something would happen to prove me wrong again and again. I’m not exaggerating when I say that I suspected almost everyone of being the killer, at one time or another. I was confident I could figure out who did it, but I was blown away and completely shocked when the killer’s identity was finally revealed. I never saw it coming.

If you like to get wrapped up in a well-written psychological thriller, this is the book for you!

Title: While You Were Sleeping

This guest review was contributed by The Geeky Bibliophile. This book blogger is an avid reader and celebrates the love of reading on her site with book reviews, bookish quotes, lists, and more.

6 thoughts on “While You Were Sleeping – Book Review”