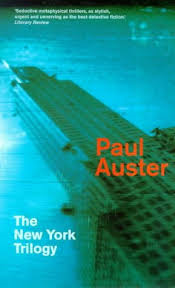 This book was actually recommended to me by my boss. I know, random! We were discussing some of our favorite authors and even genres, and he happened to have one of his favorite books on him and just said, “Here, give this a read.” Although I have never heard of the author or book, I was intrigued.

What a brilliantly written book this was! I was very impressed by the sheer cleverness of the author. Well, that is, after the about the first 40 pages. Until then, it was just a really odd book, and to be quite frank, a bit tedious to get into. Very trite facts were disclosed which, to this day, I don’t know why. In one scene, Quinn, the main character of the first story, is sitting on the toilet reading a chapter on Marco Polo when the phone rings. The reader is then walked through Quinn’s conflict of interest: does he finish his “business” or does he get the phone. Eventually, this description is born :

“By third ring, his bowels were empty. By the fourth ring, he had succeeded in wiping himself. By fifth ring, he had pulled up his pants, left the bathroom, and was walking  calmly across the apartment.” (10)

Thanks for that, Paul.

Anyway, as the title suggests, the book is split into three parts, and although each story follows a different character, they are all interlocked as you find out, later on.

It’s also a very isolated book, without very many characters. Most of the stories have 2-4 characters in total. Auster is rather keen on exploring the main character’s thought processes and reactions to bizarre situations. In the first story, for example, Quinn gets mistaken for a detective. His life has been rather mundane and disconnected from human interactions until this phone call, and rather spontaneously he decides to go along with the story. This decision changes his life dramatically. Don’t be fooled though; this is certainly not your typical detective story. Rather the focus remains, as previously stated, on the main character and the couple of other people he meets.

Verdict: it’s the book that you can read over and over again without being bored. And that says a lot, considering it’s a detective tale. Definitely a part of your post-modern fiction shelf.

This guest post was provided by The Friendly Bookworm, a blog that offers book reviews and opportunities to interact with other bookworms. Check out her other posts and book reviews on the blog, itself.