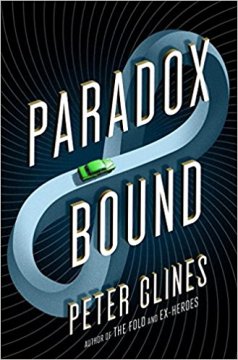 Official Summary: “Eli’s willing to admit it: he’s a little obsessed with the mysterious woman he met years ago. Okay, maybe a lot obsessed. But come on, how often do you meet someone who’s driving a hundred-year-old car, clad in Revolutionary-War era clothes, wielding an oddly modified flintlock rifle—someone who pauses just long enough to reveal strange things about you and your world before disappearing in a cloud of gunfire and a squeal of tires?

So when the traveler finally reappears in his life, Eli is determined that this time he’s not going to let her go without getting some answers. But his determination soon leads him into a strange, dangerous world and a chase not just across the country but through a hundred years of history—with nothing less than America’s past, present, and future at stake.” – Goodreads

Review: I think the characters are robots. No, this isn’t a spoiler (They aren’t really robots). Let me explain myself. At 60% is the first mention of the word pain. A lot of stuff happened before the 60% mark for pain, or something on the lines of that to be mentioned. I fully understand adrenaline can mask pain and what not, but adrenaline was never mentioned or any other feeling that could mask pain. So you as the reader were left guessing if the characters were robots or they were in pain and the author just doesn’t mention it. Could just be his style. Not read any of his other books so this may just be exactly that, his style.

Feelings. Not going to lie this bugged me a little. There were no feelings or the mention of emotions ever. Emotions/feelings help you understand the characters better. When you have none what so ever it leaves you guessing or assuming what the character is going through. Which again does not help with you understanding of the character, they felt a bit void. Like they were going through the motions for the sake of it.

Not because ‘I want to protect him’ is why she is doing this or that. She just doing it. I never really understood the characters that much, didn’t really feel like they had any real motivations. Okay they had one motivation each, which made them one layered. I personally didn’t get emotionally attached to the characters.

The whole story concept is what kept me enjoying the book. The idea is intriguing and left me thinking of ways it could play out. Even near the end I thought it was going one way and then it flipped itself on its head. I like that, makes me think and engage my brain. Not going to lie when I first thought American History, I did think it was going to be a ‘F@£% yeah!’ American style book. Thankfully it wasn’t. I am British myself, I didn’t get half the references but the American side didn’t feel like it was being shoved down my throat. It was just the right amount to explain the story. It wasn’t overpowering to the point it would have alienated me.

The story is the reason why it got 3/5 stars from me. If the characters were more ‘real’ it could have easily gotten a 4 star review.

Would I recommend it? Yes. If you purely like the concept behind the book, go for it.

I received this book from Blogging for Books for this review.

This guest post was contributed by Laura Freestone at LFbooks.