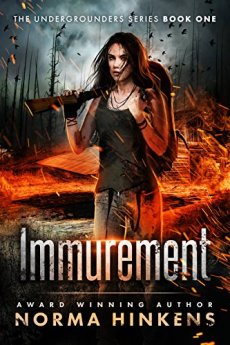 When the core of the Earth overheats and causes major volcanic activity, much of the world’s population is lost. The remaining survivors take shelter in underground bunkers in the less populous areas, and become known as Undergrounders. They are not the only survivor groups though, there are also roving bands of subversives that are happy to raid and kill for fun, known as Rogues. And from the sky, come the Sweepers, who snatch up people from the ground in their hoverships.

Derry Connolly, along with her Da and her brother, Owen, are Undergrounders living in the Sawtooth Mountains, just trying to survive. Then a nearby camp is attacked, and Owen is taken. Derry finds herself on the trail with her bunker mates, Big Ed and Mason. Despite her young age, Derry must rise to the task of rescuing her brother, facing Rogues and Sweepers, doing anything necessary to stay alive.

Immurement is the first book in The Undergrounders Series, a YA dystopian/sci-fi saga. It is a fast action packed ride of survival suitable for middle to upper high school students. This story is about survival, but there are also science fiction and futuristic themes, including cloning and artificial intelligence. There is also a lot of violence, weapon use and death. It all felt appropriate for this story though.

The flow of the story was pretty fast, with lots of action. It was well written and descriptive, though I am still a little murky on exactly what happened to cause the devastation of the core overheating. I also didn’t quite follow how the world went from individually run countries to a sovereign leader, or why. I could have done with a little more background to the situation at hand, but I ploughed on and still enjoyed the story. The ending wrapped up the story nicely, while setting the stage for the sequel.

Most of the characters were quite complex. As the story progresses, we get to know the characters and their backgrounds, and watch them develop. In particular Derry grows quite a lot during the story, from a dreamy kid into a leader, a transformation that is not without its bumps.

She had some tough decisions to make, but she did her best. I liked her. I also liked most of the other characters. Mason was a very interesting character; he seemed so cold and tough at the start, but a gentler side appeared later on. And Big Ed was a tough old cookie, though discovering his past surprised and saddened me. Blade and Rummy were suitably despicable as Rogues, cut-throat, violent and very very scary!

The leader of the Sweepers was a hideous person inside and out. Him and his work gave me shivers! He reminds us why the responsibility of scientific development should not be given carte blanche to a single person. The bodyguard clones were blood-chilling too, but I also felt bad for them as they were made to be like that, with no life of their own.

Overall, this was a complex read with lots happening. At times it was sad, but it was always exciting and engaging. Immurement is set to be released on the 16th December 2015, with the second installment scheduled for January 2016. I hope the next book is as exciting as the first!

*I received this book as a digital advanced reader copy from the author, who asked me for an honest review of this book. I did not receive any other remuneration, and the review is composed entirely of my own opinions.

This guest post was contributed by Today We Did. Sara reviews children’s fiction, young adult fiction, and non-fiction, which she complements with kid art, crafts, and activities, often involving her children’s opinions in her reviews. She likes to accept self-published or small publisher books, and she’s branching into author interviews.