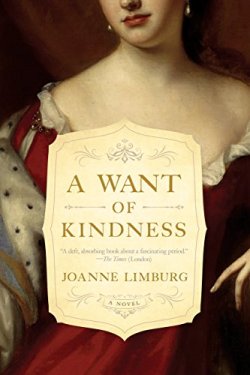 A Want of Kindness by Joanne Limburg

Opening on her childhood, this book tells the story of Anne, the niece of the King of England in the 1600’s, up til she takes the throne herself in the line of succession. She’s a woman aware of her place, who loves her older, bossy sister Mary and who has been raised a protestant, in spite of her father remaining a catholic. She barely remembers her mother, who has died, but gets along fine with her stepmother, until her father takes the throne.

It’s a fascinating look at growing up at court and family life in a royal family, as well as the expectations of a woman of the court. Anne would fall pregnant and lose about 18 children, which was not uncommon, but is incredibly tragic. She would fall foul of various relatives during her time, often finding that those close to her would change towards her when they were in power.

I really like books about history, whether they’re fact or fictionalised. What’s wonderful about this book is how detailed the author has made her research. A lot of the letters and conversation in this book is taken from actual documents, so it’s full of facts, but doesn’t read like a history lesson. I loved the descriptions of life at that time, and the political machinations both in Church and State. And I loved that Anne was often aware of the hypocrisy around her but knew that she wasn’t supposed to notice. I like how she’s an over eater and a hypochondriac, not exactly a glamorous figure, but her life and the upheavals that are part of the everyday for her are so different to normal life.

When I picked up this book, I was drawn to the story because I knew nothing about Queen Anne, who was only monarch for the approximate final decade of her life, and because the blurb on the back made it sound a bit more racy than the book actually is. It’s not a book about a debauched court but about a highly religious and divided one. Anne is hardly a lush, and more of an indulgent over eater than anything, who prays a lot and worries that her children’s deaths are because of her sins. In some ways, this book can be a little dry because of that. It’s one for history lovers, who love the minutiae of lives lived at other times, but because Anne is a nice person, but not a terribly rebellious or bright one, the book can feel a little long at times. Good, but long.

However, some things really amused me, like the way it was considered unnatural that Anne and her husband liked to sleep in the same bed, which was not common practice amongst the social elite at the time.

Read It If: this one is for those of you who love history, especially women’s history or that of British monarchs.

Check out A Want of Kindness here.

Guest review contributed by CravenWild. Hermione is a book blogger who reads widely. She has an academic background in classics, film, and theatre, so she has a strong grasp of story, good writing, and character.