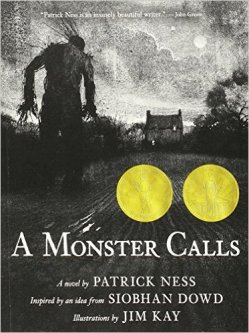 Published by Candlewick in August 2013.

Wow, I just finished reading this book and I’m so disappointed in myself for not having read it sooner. What an amazing, heartbreaking, beautiful book. From the very first line, I was hooked.

Reminiscent of Guillermo del Toro’s 2006 film Pan’s Labyrinth, this story about a 13-year-old boy, Conor, struggling to cope with his mother’s ongoing illness left me in tears for most of the afternoon.

It begins when Conor wakes just after midnight one night to a monster in the form of a giant yew tree calling him from outside his bedroom window. From there, Conor and the monster enter into an agreement– the monster will tell Conor three stories, and in return, Conor will tell the monster the unspeakable truth…

As with Pan’s Labyrinth, this book has a dark, fairy-tale like quality to it, and Patrick Ness skillfully balances the mythical with the mundane. Conor’s grief is a palpable thing. An uncontrollable beast. And… well, to tell anymore would surely give too much away.

This book will leave you crying puddles of ugly tears, but it’s worth every second of it. I would recommend this book to anyone in a heartbeat, especially to those who believe in the power of stories. Go read it now– just maybe not while in public.

I received a copy of this book for review via NetGalley.

You can find A Monster Calls here.

Guest review contributed by Watch This Space. This blog features discussion pieces, book reviews, and trend pieces. The blog’s owner, Kelsey, has quite the experience, as she has a MA in publishing and works in the publishing field.