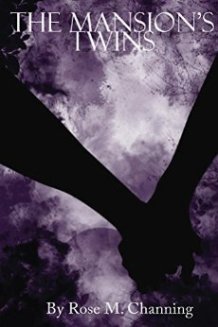 Ellie and Savannah Senka, fourteen year old twins, ran away from their unhappy homes, thinking they’d return after a brief adventure. Together, they journey to another world. The new world is full of magic, but though it was once beautiful, it is damaged, unbalanced, and dangerous after a terrible storm.

Ellie and Savannah may be the only ones with the power to restore the world to its original state, for the magic of twins is rare and powerful. The girls are welcomed into a grand mansion, the safest place in the aftermath of the storm. There, they learn who they are, and what they have to do. To restore the world, they must travel through the mansion to the center of magic and reset the balance.

They discover their own magical abilities, find joy and friendship in the mansion’s family, and face the dangers of the storm’s left-behind magic. The journey to the center of magic is full of twists and turns, magic and excitement. Ellie and Savannah support each other to overcome obstacles along the way, knowing the whole world is depending on them.

Note: I received a copy from the author in exchange for an honest review.

A different world? Storm-created beings? Monsters? Quests? Totally up my alley! I have to say that I enjoyed reading this novel. I got totally hooked into this other world that I instinctively switch off from reality for a while. This book is engaging along with the characters who are just lovable and fun to read.

Speaking of the characters, the protagonists in this novel are twins—Ellie and Savannah Senka.  So we’re having the chosen two! Because why not?

So, they once live in a world of magic but then a storm ravaged that world, brought chaos into the whole kingdom and now there is no balance. During the storm, the Senka twins escaped and then they grew up into this world with no magic. But a prophecy about twins resetting the balance back in the center of magic brought the Senka twins home.

Personally I think that the premise is interestingly unique. First we have a storm so strong it destroyed the balance of the magical world, disrupted the current of magic and created magical beings. The storm-created beings got me intrigued. I mean it is so freakishly awesome yet disturbing at the same time. Although I was just looking for more details about the storm. Everything about it and the events right after was still unclear and I get that its part of the storytelling. So maybe on the sequel. Right?

Also can I just mention how fascinated I am with the so-called “Glow” which serves as the kind of magic people are all capable of having aside from special gifts such as levitation or healing. The Glow is something that is natural for the magic folks, it can be used for fighting, illumination and even for dancing! How awesome and fancy is that?

Like any other fantasy novels, of course we have an adventure for the protagonists and here, it is to go to the center of magic to reset the balance. The events that transpired before finding the center of magic is so exhilarating. To give you a heads up, everything occurs inside an enormous mansion, which I guess is obvious from the title alone so I don’t know why I’m giving a heads up. Anyways, OH. MY. GOSH. The mansion is yet another fictional world I’d like to take a tour on. Every time they get into yet another part of the mansion, it just makes me read even more. Every opened doors, every transporter mirrors and every fighting scene with some storm-created beings were all enthralling I forgot the reason for needing sleep. So I guess I’m making it clear how fascinating this book is.

Now aside from the premise, I also admire the characters in this book. Though there might be a lot of names to actually take account of, those who are of need in the story got the right exposure. I like the idea of having a queen in a child form because it makes it even more magical. What I like about the queen is her relationship with the twins, it was all pure love, care and guidance.  And the twins see her as a friend and at the same time a queen who would face the enemy herself to protect her people. And not just that, the relationship that exist between everyone inside the mansion is what I admired the most. It’s a familial love that I find as comforting and magical as it should be.

But of course, we should always have a villain. As witty and anger-driven as any other villain in any other fictional worlds. However, I find his background story still lacking. And in my honest opinion, I just think that his character as a villain doesn’t have much of an impact. I mean, he is powerful, deceptive and brutal (that last thing he did broke my heart) but I think that maybe those traits still needs development. And there was a twist to his character and which I guessed but it was well played. That part, I just have to commend.

So in totality, I really enjoyed this book a lot. I have sacrificed sleep just so I could get to the end of the Senka Twins’ journey. I hope there is more to this world.

You can find The Masion’s Twins here.

Guest post contributed by abOOkishOwl. Sprinkled around this blog’s book reviews are book quotes and original pictures, and the author is a self-professed book geek.

One thought on “The Mansion’s Twins – Book Review”