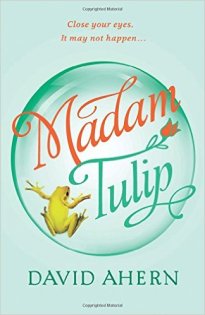 Suspense, mystery, action, a little romance and lots of laughs.
Out-of-work actress Derry O’Donnell is talented, professional, just a little psychic… and broke. Spurred on by an ultimatum from her awesomely high-achieving mother, Derry embarks on a part-time career as Madame Tulip, fortune teller to the rich and famous. But at her first fortune-telling gig – a celebrity charity weekend in a luxurious castle – a famous rap artist mysteriously dies.

As Derry is drawn deeper into a seedy world of fashion, millionaires, horses and cocaine, she must race to save her best friend from jail and a supermodel from being murdered. Her efforts threaten to destroy her friends, her ex-lover, her father and herself.

Madame Tulip is the first in a series of thrilling and hilarious Tulip adventures in which Derry O’Donnell, celebrity fortune-teller and reluctant amateur detective, plays the most exciting and perilous roles of her acting life, drinks borage tea, and fails to understand her parents.

This is exactly the kind of shenanigans that goes on in Ireland! Also- I received a free copy of this book from the author in exchange for an honest review.

First of all, you’re all probably wondering what does a frog have to do with anything? Let me assure you, in this book, we won’t be dealing with a frog-to-prince scenario. That little bugger is indirectly connected to the story! I also think it was a really cool idea by David Ahern.

I have a strange relationship with mysteries. I do.. I love ’em, I hate ’em… I want to read them, I don’t… Fussy! So fussy!

But here’s what I thought about Madam Tulip:

Do you believe in fortune-tellers and the ability to see someone’s future as predicted by cards or a crystal ball? If yes, you will enjoy this quirky mysytery. If not, you will still enjoy this book, but close the door to Mr Logic and Miss Reality.

Derry O’Donnell, an aspiring actress is the daughter of a seventh son of a seventh son  giving Derry the psychic abilities. She does card readings for her BFF Bella and it is actually Bella that comes up with the brilliant plan for Derry to create Madam Tulip. Why not make money on one’s abilities? I don’t know why Derry didn’t think of the business idea herself… Actually, I do… Derry is, how to put it… shy and in denial of her abilities? Yeah, I think that’s the case.

As a result of helping out her artsy father at a horserace, she ends up mingling with the rich and famous. Marlene O’Mara and Peter Doyle. Rich and not maybe as happily married as they seem. Marlene takes to Derry’s abilities straight away and invites her to a charity event to do readings for the guests. Marlene also asks for a private reading… She has a life changing plan and she wants to know how it will turn out. Dun-dun-duuun!

The charity event, however, turns sour when Mojo, a musician, meets a very unfortunate fate (not a spoiler, it’s in the blurb!) and Derry gets swept into a mystery which involves Bella getting arrested, and Derry receiving advice on how to act when you’re getting raided by the police. At first glance the mystery seems quite straight forward but then some ‘big guns’ are introduced and the whole thing gets more dangerous. I guess the ‘ and the plot thickens’ would be a good phrase to use here.

Did I like the book? Sure. It was an interesting read with some quirky characters. Derry herself being one of them. The ‘big revelation’ of what’s actually going on made me smirk because I have heard so many stories involving the … ahem… ‘criminal activity’ in Ireland… I know, I’m being vague, but no spoilers, right? When cocaine is involved, be prepared to mingle with dealers, users and crime bosses.

It’s hard to write this review… I’m sure the regular mystery fans will enjoy this read. I’m somewhere in between with this book. I’m an addict for the extreme and this story was quite safe in my terms. It didn’t make my blood boil or my heart thump however it will appeal to the cozy mystery fans who can’t deal with graphic and brutal scenes.

Having said that- Yes, the ending was explosive, quite literally, and there was some decent action. Yes, there’s this certain Irish pixie dust sparkling back from the story and the relationship dynamics. Yes, there are many characters who David Ahern has managed to effortlessly introduce to the story and yes, the progression of the plot was well done but when I think back to this book in years to come what or who will still be in my memory?

It will be Bruce. Ex Navy SEAL, honourably discharged for being gay, moved to Ireland to be an actor and ended up working as security. Towards the end, I started hoping for a major plot twist because the blurb mentions ‘a little romance’. I was hoping, with all my fingers crossed that Bruce wasn’t gay after all. That he was undercover and eventually ends up with Derry… no such luck though. Sigh. I liked Bruce. I really did. Instead of Bruce, the little bit of romance was around someone else… I didn’t really like him – Fitz-  because he didn’t come across as the most ‘approachable’ when needed… but I’ll just have to trust that Derry has good taste.

So, my rating will be 3 stars. It was enjoyable, entertaining and I recognized a certain charm about the whole setting. The pace was good and everyone out there that loves a little thrill and mystery will enjoy this book. There’s nothing graphic and will easily offer some good downtime with a book.

This guest review was contributed by Cover to Cover. Along with book reviews, Liis offers guest posts and author interviews. In the works are giveaways in the future.