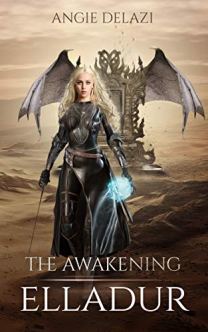 As the King’s best spy, Liya’s job is to listen. She listens to gossip, illicit plans made in breathless whispers, and brings them back to her King. Liya’s magical ability to sense others’ emotions has always helped her excel in her position.

When a longtime ally of the kingdom suddenly aligns themselves with Dar’Angaar, a powerful country who has historically sought out war, Liya’s listening abilities are put to the test. She is sent on a mission to uncover the future king of Dar’Angaar’s true political intentions. When she discovers the future king is in fact a lover from her past, her mission is thrown into disarray.

But Haydn, the crown prince of Dar’Angaar, may not be her biggest problem. Because terrifying beasts from another world are surfacing, and Liya might be the only one powerful enough to stop them.

Elladur – The Awakening is the first in Angie Delazi’s Elladur fantasy trilogy. Elladur – The Awakening explores the line between friends and enemies as Liya struggles to maintain loyalty to her king and to her home country while following her intuition, which has never led her astray before. The story is told from Liya’s point of view, but the relationships she builds with other characters is where readers can best see her character shine through. Caught between her duty to protect her kingdom and her own intuition, heightened from her magical ability to read others’ emotions, she often finds herself struggling with the right decision and who to trust. Readers will enjoy her journey of personal growth as she forms close relationships and forges her own path.

There are a wide range of characters in this book for readers to explore, beyond Liya herself. Each character has their own hidden agenda, revealed strategically throughout the book to create an entertaining web of political and magical intrigue. A series of creative plot twists quickly engage the reader.

The story progresses quickly, easily drawing readers into the rapid progression of action-packed scenes. However, the pace of the story never slowed, which may at times create difficulty for readers wanting to draw their own conclusion before being told the outcome. While each scene stands well on its own, the transition between scenes can be a bit choppy, and some of the characters and themes introduced in the beginning chapters are not built upon as the book progresses. Additionally, the novel could use another passthrough to correct duplicative wording and plot inconsistencies.

The setting of the book lends itself well to a fantasy series, creating suspense and intrigue from the very first page of the prologue. Beginning in a technologically and magically advanced world where a mysterious power is destroyed for the good of humankind, the book is set in a medieval-era world, but 500 years after the prologue. This reverse progression of knowledge is the opposite of what is typically seen and puts an exciting twist on the story.

Liya must decide where her loyalties lie and who she can trust in this new fantasy series, Elladur – The Awakening. Just when readers think they know the ending, the author adds a detail here or there to subtly shift the narrative and leads readers further into the series with an exciting sneak-peak into the next book. With a creative story line and wide-ranging character profiles for readers to sink their teeth into, Elladur – The Awakening is sure to captivate.