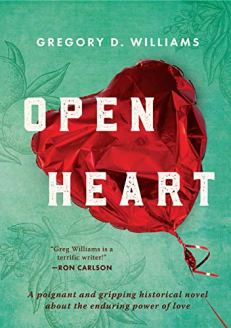 Open Heart by Gregory D. Williams is a coming-of-age literary novel that takes place in Phoenix during the mid-1970s. Gene Hull is a twenty-year-old man who has recently lost his doctor dad, who was also his hero, and is also reeling from a tough breakup with his girlfriend, Patty. The story follows Gene’s adventures one summer as he works with the Heart Team in the operating room and the lessons he learns along the way.

Like many coming-of-age stories, Gene’s story speaks to the reader on multiple levels. His experiences, although they may not be exactly the same as others’, are relatable because everyone knows the trials and tribulations of growing up. Like many young men, Gene feels he’s his own man and knows what he wants, at least that’s the persona he exhibits outwardly. Inwardly, he’s still a little boy who idolizes his late dad and wants to lay easy blame on those who he feels have wronged him in some way, namely his mom and Patty. The stabbing irony that later hits him when the truth is revealed is crushing, and the reader experiences Gene’s grief right along with him.

His regrets build throughout the book until they mount so high that they topple, and he is left having to rebuild. One scene involving Gene’s beloved dog, Apollo, is especially moving. Anyone who knows or has known the companionship of a loyal pet will be moved, perhaps to tears. Williams’s ability to render such deep emotion on the page, so much that it grips the reader’s heartstrings, is to be applauded.

Reading about what goes on during heart surgery is a fascinating glimpse into the operating room. Williams is a doctor, and it clearly shows on the page that he knows what he’s talking about when he writes the medical jargon and details of heart procedures. Although many of the characters are doctors and nurses who talk about things many of us might not understand, the author writes in a clear and concise manner. His characters are also very human. They never feel like two-dimensional words on a page, but rather the reader is drawn into the OR with the Heart Team. Their jokes, curses, jibes, and chatter feel realistic.

Not only does Williams write the Heart Team characters with emotion and depth, but perhaps the most moving of characters is an elderly lady named Mrs. Mead who sits by her husband’s bedside without wavering as he recovers from heart surgery. Married sixty years, the Meads exhibit the abiding love and loyalty many of us can only dream about. They are the couple who we see holding hands in quiet understanding, their faces wrinkled with time and grace. Mrs. Mead has a couple of heartwarming conversations with Gene. She is the grandmother everyone admires. The story wouldn’t be the same without her.

Earlier in the novel, the author alternates between flashback chapters in past tense and current-day chapters in present tense. The tense shift works well for this format; however, in the present-day chapters, there are several instances when the tense changes back and forth from past to present. Overall, this doesn’t detract from the value of the narrative.

Gregory D. Williams’s novel is a timeless coming-of-age story that will remain with the reader long after they finish the book. Open Heart opens our hearts to believing in loving again, even after we’ve been hurt, just as Gene does. This novel teaches us that life is a precious, fragile gift, both physically and emotionally.

Join 12,325 other followers
Follow The Book Review Directory on WordPress.com