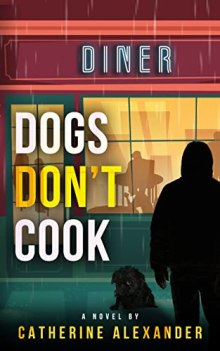 Seattle, 1995: Although Thomas “Hatch” Hatchfield left Vietnam in 1968, its horrors remain. Once a promising artist, he’s now a homeless alcoholic approaching fifty with an invisible dog, Bud, as a friend.

Court-ordered to attend Alcoholics Anonymous, he meets Rosa, who owns the diner where the AA group convenes following meetings. She throws Hatch a lifeline but is it enough to make him attempt to turn his life around?

Dogs Don’t Cook is mainly told in the present tense, from the close third-person perspective of Hatch, giving the reader a strong sense of immediacy with his musings and mental processes.

He could have been a lazily prototypical character but Alexander develops him into a unique and thoroughly investable individual, signposting depth and qualities to the reader that Hatch is yet to realize for himself. Frustrating and flawed he may be, but he is also supremely interesting and curiously endearing.

Alexander’s prose has an authentic, simplistic quality that perfectly complements Hatch and ensures the book is very readable. Even his flashbacks to Vietnam are recounted in plain terms with unflinching honesty and a strong sub-textual impression of paralyzing bewilderment.

Not all Hatch’s problems stem from Vietnam. The apparently cruel and careless nature of his upbringing in the shadow of a seemingly perfect sister, Tess, laid the foundations for his fundamental lack of self-worth and belief.

Although Hatch’s troubles are central to the narrative, they are not exclusive and all the supporting cast have stories and secrets in their different spheres. For the majority of the characters, their mysteries remain just that, and it works well.

However, in the portrayal of Anne, the AA secretary, there is an intriguing twist that could have been explored further and in more detail.

Rosa is a beautifully nuanced personality with her emotional vulnerability lurking beneath a practical, driven exterior. The nature of her relationship with Hatch was a well-considered choice, and gave their connection genuine integrity and quietly meaningful, mutual compassion.

Nick Blue, his ex-marine buddy, is a different story. Psychologically damaged beyond repair, he brings simmering aggression and unpredictability. The dynamic between the men is slightly toxic despite, or possibly because of, their shared experiences.

Bud is imaginary, but it’s easy to disregard as he has a real sense of living presence. He functions on multiple subjective levels, providing light comedy which diffuses the gravity of Hatch’s alcoholism.

Additionally, he encourages snippets of backstory and flashes of insight, driving the narrative forward whilst enabling the reader to build up a contextual picture.

As the story progresses, the reliance Hatch places on Bud becomes incredibly poignant. The more the reader learns about Hatch, the greater Bud’s importance becomes as a friend, counselor, and the voice of reason.

Indeed, he seems to perform as Hatch’s subconscious moral compass. How their character arcs diverge at the end was cleverly thought out with a strong metaphorical meaning behind the literal.

Hatch’s artistic talent is the thread he clings to with varying success. The conflicting feelings he has concerning his work are convincingly conveyed and Alexander’s descriptive writing brings his art vividly to life.

A couple of plot elements dovetail too neatly and, in contrast, a couple are too open-ended. Notwithstanding, the story is skillfully woven with a nicely satisfactory conclusion.

Dogs Don’t Cook is a deceptively profound and multi-layered, little gem of a novel that addresses some dark issues through a quietly compelling main character. It’s gently captivating, entertaining, yet affecting storyline is a testament to the redemptive power and kindness of strangers.