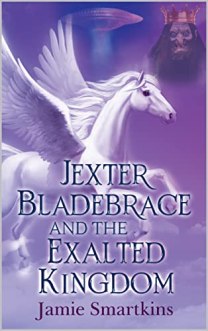 In Jamie Smartkins’s Jexter Bladebrace and the Exalted Kingdom, set in 2080, an asteroid strikes Earth, changing life for all as we know it. Now doomed, Jexter and his friends must rely on aliens called the Spectropeans for their survival. After spending some time on a foreign planet, Jexter and his friends return to Earth to try to forge a way forward, only to be met with unexpected hostile aliens.

The author sets up the story with an exciting premise that jolts the reader right into the action. Reading the back cover of the book would no doubt entice lovers of science fiction and fantasy, and futuristic settings with a race against time for survival of the human species is a thrilling undertaking. Although the pace feels rushed at times, the fast-paced action keeps the story’s momentum moving forward. The reader wants to take this journey with Jexter and his friends and longs to feel invested in the characters, so perhaps a bit more page time given to them would go a long way toward connecting the reader with the characters.

The overall story is interesting when summarized. Some details of how certain missions play out could be expanded. The author does a satisfactory job of setting up the initial conflict, but the characters overcome each obstacle along the way to the climax too easily.

Although the story is plot-driven, the reader still wants to feel for the characters and get to know them better. It could be argued that since the premise of the story is one of survival, the characters are under extreme pressure often and may not be their usual selves. Jexter does have a love interest, Shelly, and the reader clearly sees he loves and cares for her deeply. He is also brave, resourceful, thoughtful, and a good leader under pressure. The reader would enjoy knowing even more about Jexter to understand some of his motivations that go beyond the need to simply survive.

Jexter Bladebrace is a satisfactory protagonist and has a fun name. Other characters, such as the aliens, the Spectropeans, also have clever names, and Smartkins describes an intriguing new version of humans called humphibians. He world-builds the new version of Earth in the aftermath of the asteroid and also some foreign planets, although a reader of science fiction would enjoy more details of these strange worlds.

At just under 20,000 words, this novel is on the shorter side. Combined with its simplified narrative, it may be best targeted for middle-grade readers. If the author intends for Jexter Bladebrace and the Exalted Kingdom to be aimed at such an audience, then the story does not need to be expanded much beyond what has been written.

Jexter Bladebrace and the Exalted Kingdom is a fun jaunt for a science fiction novel and would be best for middle-grade readers. Smartkins sets up a promising premise with lots of action in this easy-to-read novel. Readers who are looking for an entertaining, light read will enjoy this story.