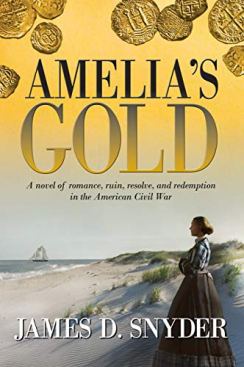 Title: Amelia’s Gold: A Story of Romance, Ruin, Resolve and Redemption in the American Civil War

This thoughtful novel shows how one women responds to the challenges and difficulties of the very end of the American Civil War, blossoming into a complex, resilient person despite the tragedies and hardships she faces.

Amelia Beach is the daughter of a wealthy merchant in Savannah, and the story covers how her father gained a fortune in gold originally, taking readers back to the late 1820s in the Outer Banks of North Carolina and showing how a poor fisherman’s son discovered a pirate treasure. Then, the novel carries readers forward to Amelia’s part to play, using the gold to further the South’s bid for victory while serving her family’s own interests.

Amelia starts the story as rather petty, but by the end of the book, she’s transformed into a giving, caring woman, and her journey is a delight, especially once she returns to North Carolina from Nassau and is faced with circumstances that require action rather than just waiting. The romance passages are quick and lightly touched upon, leaving the focus on Amelia rather than on her chemistry with other characters.

Amelia’s companions are nicely varied, from an educated Frenchman of African descent to freed slaves, rich and poor white women, conniving government officials and British sailors, eager to go home since there’s no longer a fortune to be made by running the Union blockades. Her place in the world seems a bit undefined, though, to where it’s not clear if she truly was a sheltered young lady with typical morals and conventions until her adventures changed her or if she was always aware of the seedy side of life and willing to turn a blind eye or embrace unconventional behavior as her feelings and the situation dictated.

The narration is nicely experiential, showing the sights, sounds, and gritty nature of living in the Civil War while depicting the various places Amelia visits, from the Outer Banks of North Carolina to Savannah before the Union occupation to Nassau and the Bahamas during the height of their role as resort and neutral harbor.

The book could use some editorial polish, and the section where Amelia waits in Nassau for news from her father and the Bank of England can be rather tedious, but this reflects the real-life pacing of such a moment. Amelia’s own prejudices are hinted at rather than the focus of the book, offering a story of a young woman’s blossoming rather than an examination of her own bias, to where the story features race differences without making them the central thrust of the book itself.

Readers looking for a different sort of Civil War story, one that features the hardships outside of the major battlefields will enjoy this story of determination, resolve, and quiet heroism. The author achieves a nice balance, showing the prejudices and viewpoints of the characters without taking sides or harshly condemning either for where things stood at the time. The characters are varied, the settings are beautifully evocative, and the troubles clearly depicted with a touch of grace and humor.