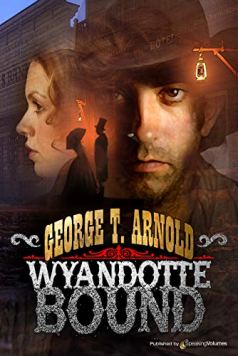 Wyandotte Bound covers three romances and a host of characters as the fictional western town of Wyandotte, Nevada, grows and develops. The stories focus on the wealthy Van Shelton family and their daughter and two sons, and their daughter’s friends—a young doctor and a lone gunslinger who wants to leave his reputation behind and finally be an ordinary citizen again.

The romances themselves can feel a little awkward, as the characters seem drawn to each other by fate more than anything specific about who they are and what they want or like in the other person. The plot is more realistic than dramatic, to where conflicts are solved with relative ease, at times, sometimes in between scenes, which stands in contrast to the western genre, where shootouts and showdowns are a bit expected.

The strength of the story truly lies in how it depicts a small town and how it enjoys all the fun a western can bring, from the educated and kind-hearted madam at the local “gentleman’s club” to the gunslinger who, through no crime or fault of his own, finds himself on the run. Readers get to know the people who live in the town, and seeing how they prosper and face challenges is the true draw for this book, revealing a community of good people living in a harsh and sometimes difficult environment.

The narration doesn’t necessarily dwell on the details of the setting, though enough is provided to create a clear idea of where the town is and how it differs from Boston, where many of the characters are originally from. Still, there are comments about moving cattle away from the big house for parties and discussions of how far one would be from one’s neighbors, showing the choices pioneers made in choosing to marry and live in Wyandotte.

The focus on community does mean that major aspects of the characters’ stories sometimes seem overlooked for the sake of the plot, where more focus is given to the bid to secure the railroad than the difficulties in conceiving a child that one couple faces, and it might be nice if more balance was shown to bring both into focus.

Easy to read and delightfully quick, this book brings all the classic aspects of a western to a community story of courage, danger, difficulties, and romance. The timeline is beautifully handled to show the twists and turns of life, and the author paces it nicely, keeping things interesting and effectively unified, despite the large cast in a book of this nature. Those who like a western tale that focuses more on townspeople than outlaws, rustlers, or ambushes will enjoy this story.