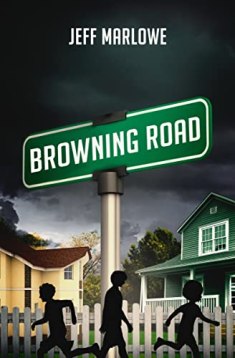 It is said that a man’s character is determined just as much by nurture as it is by nature. The person we become and the beliefs and values we carry with us to adulthood are largely influenced by the environment upon which we live and the familial influences we subconsciously absorb when we were too young and impressionable to know better. What happens if that environment is the very definition of dysfunctional? What becomes of us if the very foundation upon which we ought to build our future selves is marred by neglect and abuse?

Browning Road is the coming-of-age story of Jack Pszcynack set in 1980s suburbia. Narrated in first person, readers will get to see the neighborhood and the people living in it through the eyes of its protagonist. Jeff Marlowe did a good job of giving his main character distinct voices corresponding to the specific stages of his life from boyhood to adulthood. It was a clever way to underscore a child’s confusion as he initially looks to the adults in his life to define how he too should see the world and compare this to the conflict created when he grows up and begins to form his own opinions.

This book is largely character driven, and there is a lot about Jack that readers will naturally relate to and want to root for. Everyone loves a good underdog story, after all. The misfortunes and abuse Jack experiences at the hands of the very people that are supposed to care for him makes him incredibly sympathetic. It was also admirable how he fought against the subtle and not so subtle racism of his family, and his inner conflict—that desire to please a parent even when that parent is wrong—is something that will resonate with anyone who has ever been a kid.

However, the plotting and pacing of the book could have supported the story too so that the whole of it makes a bigger impact. The almost autobiographical format felt a bit jarring when one thinks about the larger tapestry that is being woven. The author could have put more emphasis on certain scenes and certain aspects of Jack’s life. There were times when it felt like the readers were just being propelled to the next chapter and the chapter after that until the inevitable conclusion is reached. It would have been good to condense Jack’s slightly sinister relationship with his brother Joe into one climactic scene, or really show how the loveless relationship between Jack’s parents shaped his views and future relationships.

This book would have also benefited from further editing to reduce extraneous details and scenes that don’t add much to the overarching story, because the basic premise is strong enough to stand on its own. Browning Road is thematically darker than your run-of-the-mill coming-of-age novel, but this is what makes it more interesting. It touches on depression, seclusion, and racism. At times, the book felt constrictive almost to the point of claustrophobia. Jack also felt like a passive observer rather than an active participant in his own life, allowing things to happen to him rather than doing something to change his circumstances. Some readers would criticize that, but somehow, as the book progressed, it became a powerful allusion to how trapped, helpless, and vulnerable we are as children, and how difficult it is to get past that feeling as adults.

Browning Road delivers a devastating portrait of a family life in tatters, amidst the backdrop of racial tensions and the ongoing social change of the 1980s. It contrasts the simplicity of childhood—the friendships, the love for comic books, and the days when everything can be solved by ice cream—with the painful complexity of growing up, even more so when you are forced to grow up before your time. More importantly perhaps, Browning Road is the story of choices and decisions, and how these can determine the strength of character you possess and the kind of man you will ultimately become.