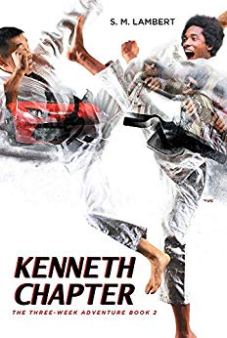 A red Ferrari, a violent delinquent, the sexy captain of the high school cheerleading squad, and lots of kickass karate: Charles Gill Jr.’s three-week adventure is a wild one. In Kenneth Chapter, sixteen-year-old Charles promises to make the most of his three weeks of freedom while his father is away on a business trip. But when one poor decision spirals out of control, it’s up to Charles to fix it before his father comes home.

Navigating the world without his strict father’s supervision, Charles and his friends find themselves in all sorts of trouble. Disobeying explicit orders, Charles steals and drives his father’s shiny, red Ferrari. When Charles catches the eye of the hottest girl in school, he knows this could be his time to shine–if he plays it cool and keeps up the charade that the Ferrari is his.

The car ends up bringing Charles more harm than good, and the novel turns into a wild goose chase in which Charles’s friends help him desperately avoid a neighborhood enemy who he accidentally made very, very angry.

Youthful and hilarious, Charles and his friends are the highlights of the novel. Their friendship feels organic and high-energy, and their spontaneous interactions with the other characters add just enough comedic relief to lighten up the serious situations they find themselves in.

The book is incredibly short and reads more like a short story than a novel, but it is a complete story nonetheless; from start to finish it is action-packed, entertaining, and fun. Unfortunately, because the book is so fast-paced, sometimes the scenes fly by and fall a bit flat because they lacked the detail and depth needed to really make an impact.

Changing up the pace throughout would have highlighted the characters’ relationship as well as allow readers to create a stronger connection to the characters. This would also have been helpful in emphasizing and heightening the sensitivity in the more emotional or tender moments, which often fall through the cracks because they are so few and far between.

The dialogue between characters, who are all teens and young adults, is natural and realistic, but it does get vulgar at times. This title is recommended for mature audiences, so if readers are looking for a Young Adult-appropriate read, be aware of the explicit language, violence, and sometimes crude imagery.

The novel is very diverse, with a cast of characters that are a spectrum of races and ethnicities, as well as different financial backgrounds. With the latter, the novel sheds light on divisions between neighborhoods of opposing socioeconomic statuses and how that affects the teens and young adults as individuals and in their relationships with each other.

Kenneth Chapter is adventure filled with impulsive rule-breaking, race car driving, and fighting. Readers will live vicariously through Charles and his friends as they navigate their wild experiences and scandalous decisions without adult supervision. This coming-of-age teen comedy is the perfect light read for readers who are looking for charming characters and action-packed scenes.