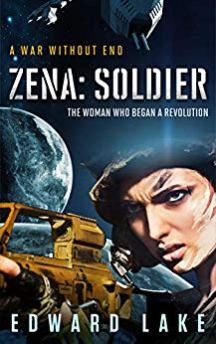 This story reads a bit like Hunger Games meets Mulan as it retells a young woman’s struggle to protect her family while fulfilling her dream of being a soldier—despite her being a woman and being drawn, romantically, to other women.

Zena is a slave whose family lives on North Star, the home of gladiatorial battles hosted by a gambling corporation. In Zena’s world, every person is born with a holy place in life, and her place is on the bottom—but if anyone besides her family knew about how she truly feels about her female peers, she wouldn’t even be a slave anymore. She’d be dead.

Then, the empire is shown to be vulnerable following a joint attack by rebels and the empire’s age-old nemeses, the Serpents. Suddenly, the empire needs more troops, so the High Priest of the Holy Empire decides to draft slaves into soldiers. It’s unprecedented and risky, yet he feels he has no choice. He needs the Serpents to be destroyed, once and for all, before they manage to destroy the empire and his family in the process.

When the summons comes for Zena’s brother, she decides to take his place. He’s still battling a broken arm from his last fight, and Zena is his twin. She’s certain she can pull off the masquerade, at least long enough to survive training. But when she comes face to face with the High Priest’s daughter, she finds that hiding who she is—and how she feels—may not be as easy as she thought.

The world building is intriguing without being laborious, and characters use technology without talking about how it works. Overall, traveling throughout the galaxy and using ray guns provides more of a backdrop for the story than anything else.

The main character and her family are presented in a very compelling manner, and the sections of the story told from Zena’s perspective are both the most consistent and the most personal. Those told from Captain Cain’s and the High Priest’s perspective can be hampered by the religious tone used, as it doesn’t feel like either of them quite believes what they’re saying.

Zena claims the High Priest is a fraud, but one would think he’d truly believe his controversial doctrines or would admit to his lack of belief in his own personal thoughts. Similarly, his daughter can come across as lacking conviction, even when she’s supposed to have awakened to a new understanding.

Though combating a faith that is shown to be harsh and unfair, Zena still manages to keep her personal belief in God and the Holy Spirit, and throughout the story, the plot shows that not everyone who serves the empire is as vicious as the High Priest.

This action story nicely blends the personal with the galactic, juggling the importance of faith and family as well as romance and identity. This “soft” science fiction story will appeal to readers who like steady pacing and the beginning of a larger epic.