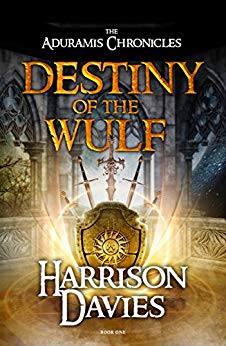 Title: Destiny of the Wulf, The Aduramis Chronicles #1

Orphaned as children by a marauding horde of orcs, Coinin and his brother Marrok have been raised by their mysterious uncle who trains them in the ways of swordsmanship, combat, and survival. They know little of their family history until they are thrust headlong into a treacherous journey to an island where a mysterious organization, the Brotherhood of the Wulf, welcomes them as long-expected chosen ones. Soon they take up arms to protect their new friends and are thrust into a clash between the god of death and the mortal protectors of life that will set them on the path to greatness.

Davies has carefully crafted a classic high fantasy with his first book in The Aduramis Chronicles. The book is seamlessly edited and well-presented, with beautiful interior design and custom maps at the front of the novel. The magic system in this book is unique and integrated into the world. Coinin’s ability to swap consciousnesses with other living creatures opens exciting new doors of possibility that audiences will love walking through with Davies as their guide. Similarly, the gruesome demands the god of death makes of his devotees add an interesting religious element to the story.

Audiences will enjoy the dynamic between Coinin, the more reserved and magically-inclined brother, and Marrok, his more reckless and battle-hardened brother. Some more exploration could have been done into their motivations and inner worlds, however. The brothers go along with a demanding trek to an unknown land with their uncle and his drawf comrade without much questioning, and at 150 pages into the story, most of the brother’s personalities, pasts, and motivations have yet to be revealed.

Menin, the Curator of the Brotherhood’s temple, cuts a strong and elegant figure with her devotion to her calling, and the brothers’ uncle is a sinister force to be reckoned with. Unfortunately, intriguing characterization is hampered by an inconsistent use of psychic distance. The narrator often ducks into the thoughts of some characters to share unnecessary information without ducking into the thoughts of others to share information the reader is much more concerned with. This causes confusion about which characters are the protagonists of this story and what parts of the plot audiences should be paying attention to.

The narrative is episodic but keeps readers engaged by alternating between punchy battle scenes, revealing conversations, and secretive double-dealings. These various threads work toward the overarching plot points nicely by weaving prophecies and intrigue into the adventure. Fans of Dungeons and Dragons will be delighted by the action sequences, which are inventive and take time to show the strategy and skill behind battles won. Dragons, orcs, warlocks, and goblins all make splashy appearances sure to delight any fantasy fans.

The novel’s intriguing conversations and exhilarating battles could have been made even more effective by opting for a quicker storytelling pace. At present, the leisurely pacing may make audience members lose interest before they find out the main conflict of the story well into the novel’s second act.

Audiences looking for a more subversive or experimental take on fantasy worldbuilding may be left cold by this classic heroes’ journey tale, but to those who enjoy reading classical takes on fantasy narratives and magical creatures, the worldbuilding will feel familiar and exciting. Fans of The Prydian Chronicles, Lord of the Rings, and other pillars of classic quest fantasy will feel right at home on this band-of-brothers adventure.

Destiny of the Wulf is an excellent series starter for anyone looking to re-experience the thrills of the high fantasy novels of the seventies and eighties in a new way. A game-changing final scene will keep audiences coming back for the next installment of this fantastical adventure.