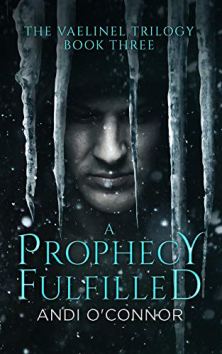 This novel rounds out The Vaelinel Trilogy, where readers follow the fate of Irewen, Silevethiel, and their friends as they try to destroy the Corrupter. Set in a medieval world rich in magic, the story pays homage to fantasy classics like The Chronicles of Narnia and The Lord of the Rings while creating a new, thoughtful world of its own.

Irewen is a gifted young woman who’s supposed to unite the four elf races, yet she falls into a trap and is captured by the Corrupter. Separated from her Guardian, the lioness Silevethiel, she must endure temptation and torture as the Corrupter seeks to gain her power so he can rule unchallenged.

Meanwhile, her friends try to carry on without her. Realizing they cannot rescue her without the magic each of the races can supply, they go throughout the land to recruit allies, but they find the Corrupter has gone before them, his Drulaack placed in positions of power, hidden in plain sight.

For a fantasy story, this tale is on the contemplative and relational side, with events unfolding realistically rather than at a fast pace. The range of themes in this book would fit well in young adult fantasy, as Irewen and her friends are discovering their places in the world and how to handle the responsibilities they’ve been given.

Topics like suicide and rape crop up fairly often, and hiding behind the abilities of one’s parents and receiving help or being hurt by them is also discussed. Still, overall, the book has a positive tone. It encourages one to accept those who are different without wanting to hurt them or those who don’t accept such differences—though the characters aren’t as varied as they could be. Living for others and not giving up are equally discussed.

The book spends enough time with the various characters to reveal their feelings and motivations, even the Corrupter. The elves and humans seem to see their time in Vaelinel as a duty, something allotted, and three characters, at least, contemplate suicide. The novel indicates that suicide hurts adjacent people, creating a great loss, yet the actions of one character seem to oddly undercut this message while being condoned due to the character’s hope of helping another while frustrating the Corrupter’s schemes.

The novel gives the various elves different kinds of magic, but while some of them are unique—like the Sea Elves who control water-based magic and the Light Elves who work with light—some of the other elves just seem to duplicate the Light Elves or have a more general magic.

The narration, when in battle, tends to be repetitive, with frequent screams and glares, and the plot unfolds in such a way where readers are left in the dark while the characters make plans “off stage.”

Those who enjoy a thoughtful journey, where doing right has its realistic yet painful sacrifices, will enjoy this story. Rich in characters, friendship, and humor with a hint of romance, the story is a welcome addition to the fantasy genre.