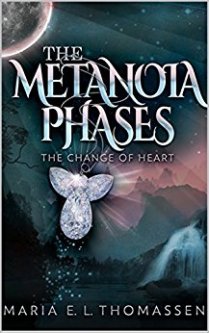 Title: The Metanoia Phases: The Change of Heart

Magic, romance, and family secrets collide in this young adult fantasy novel by Maria Thomassen. As the crowned princess of Serendia, Maria has always known love and security. Beloved by friends and family and admired by many, she has always been certain about her place in the world.

Things take a turn for the worse when she starts losing control of her powers–powers that she’s had for as long as she can remember. Suddenly, long-buried family secrets start to come to light, secrets that have the power to change everything she’s ever known about herself.

In addition, a rift develops between Maria and her husband because of the latter’s frequent absence. As a consequence, Maria finds herself drawn to the arms of another man, torn between duty and passion, and all while trying to sort through the lies and betrayal to find the truth of who she is.

The book draws inspiration from different folklores and myths, and the author combines these into an ambitious tale that will capture the interest of many fans of the genre. The plotting could have been tightened to ensure that all the fantasy elements form a more cohesive narrative, but the premise is interesting enough to keep readers turning the pages.

There was a tendency to give too much focus to the developing romance at the expense of actually moving the main narrative forward. An exciting twist to the story can suddenly be interrupted by a lovers’ quarrel, which may discourage readers who are more interested in the former.

The plot devices used to develop the central love triangle don’t feel terribly organic and seemed almost contrived. The angst and melodrama were also at times disproportionate to the scene being played out, and the emphasis given to the love story took the focus away from what is quite a strong fantasy plotline.

The author’s imagination and talent shines through when she focuses on building and exploring this world she’s created. It is a world that is different yet familiar at the same time, where exciting action sequences are interspersed with something as mundane and normal as sharing a cup of coffee after a big battle.

The cast of characters was massive, and she could have done a better job of introducing both the individual characters and the relationship they have with one another. As the story progresses to its climactic conclusion, however, this becomes less of an issue. It also helped that the characters’ names were easy to remember, being littered with pop-culture references.

A generous helping of intrigue and forbidden romance ensure where readers are in for a gripping journey of twists and turns. It is anchored by a heroine who is both strong yet flawed, someone that the young adult population will be able to relate and identify with. Intense, fast-paced, and surprisingly emotional, it’s a solid lead to a planned series and will keep readers anticipating the next installment.