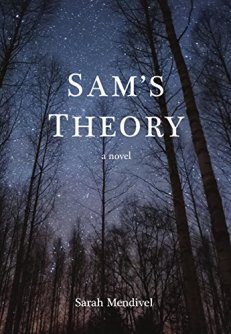 This is the thoughtful and philosophical story of Sam, a young woman who grows beyond the abuse, neglect, and rejection she’s experienced from the adults in her life. The tale starts with her on the run in the wilderness of the Pacific Northwest and follows her journey of growth and discovery until at last she’s ready to rejoin the world and interact with it once again.

After spending some time on her own, Same finds a strange, magical treehouse that belongs to an eccentric but caring older woman—the “Theory” from the title. By accepting Theory’s hospitality, she is reaching out and admitting that she needs help, and thus begins their relationship as patient and therapist.

Most of the narrative is centered on Sam’s conversational therapy sessions, where Sam shares her past and Theory discusses her beliefs on what human feelings do, how they work, why they’re in our lives, and how one should respond to them. There are flashback memories as Sam falls in and out of awareness, both as part of her “star tracking” therapy sessions and as part of her coping with life, but they feel very natural. Sam has suffered greatly, and recollections of her trauma can be just a thought away.

And the author doesn’t withhold on the descriptions and intensity of the traumatic moments, though the wording and content is kept appropriate for a young adult audience.

Theory acts as a wise, religiously-neutral healer who wishes to see people grow into who they could be, and while she states things very matter-of-factly, she is gentle rather than pushy. And there definitely is magic in the story, as rare butterflies appear and fireflies light up the sky—despite the fact that neither are native to the Pacific Northwest area.

The story could benefit from a hint of editorial polish in places, but for the most part, the challenge is in the story structure itself. The novel comes across as more therapy than plot, and for a young adult story, it’s rather light on the action. It isn’t until the last half of the book that the “doing” starts outweighing the “talking,” and even then, there’s a lot of dialogue as Sam tries to help other orphans heal using Theory’s techniques.

The best parts of the story are the relationships that form between Sam and Theory and between Sam and the natural world around her. She goes on walks and interacts with her surroundings, encountering giant trees, elks, squirrels, ferns, Steller’s jay, bioluminescent algae, and other natural wonders.

The story gives readers a distinct feel for the world of Theory and the magic of the mountains where Sam’s hiding. Those who enjoy philosophy with a dose of narrative or who have experienced trauma in their own lives and are ready to face it and grow past it will enjoy this tale. Rich in narrative beauty and atmosphere, Sam’s Theory will give readers plenty to consider while delivering an emotionally poignant tale of love, loss, and growing into one’s purpose.