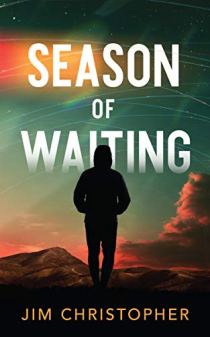 Caleb Allard, an accountant living in Truth and Consequences, New Mexico, has stage-four pancreatic cancer. At this point, there is nothing the doctors can do for him, so he arranges his medically-assisted suicide, the Final Release, in an effort to spare his children from witnessing the cancer overtake his body.

What Caleb doesn’t account for is the sudden voice in his head telling him he has a chance at redemption, to create purpose in his mundane life. The voice tells him of a boy with mystical healing powers who resides in the town of Utopia, Texas, hundreds of miles away. While Irene, his straight-edge daughter, and Wes, his drug-addict son, have contradictory reactions to this new voice, Caleb decides to pull a Hail Mary and use what he knows are his final days to seek out this boy, cure his cancer, and fulfill what the voice proclaims to be his life’s purpose.

Season of Waiting is a psychological thriller that will appeal to those who enjoy books such as Stephen King’s 11/22/63. Season of Waiting has all the elements that make up a noteworthy thriller. The narration style heightens the suspense by bouncing between multiple narrators, causing one to question what’s real and what isn’t. One great example of this is when Caleb engages with the voice. The conversation in his mind is leagues different from what the characters around him witness, almost as if one side of his body spasms and takes over as a different person. The overall effect is chilling and unsettling, adding to the book’s appeal.

Jim Christopher creates surrealism within the familiar, mundane world without compromising realism or believability. The book’s progression creates suspense, but is linear enough that readers won’t feel confused or dissociated from the story. With writing free of awkward sentences, grammatical errors, or inconsistencies in flow, readers will feel fully encompassed by the story, free of distraction.

The main theme spun throughout the book is choices and consequences. Each character is dynamic, constantly breaking away from the assumptions readers may have formed about their personas. One of the most appealing aspects of the story is the rate at which it escalates from a justified, albeit impromptu, dying man’s journey, to a harrowing tragedy. Each choice made by the characters is a fork in the road affecting a thousand other people and a thousand other decisions. The story culminates in an ending with just the right amount of suspense, the perspective from each character getting shorter and shorter, replaying a single moment from multiple points of view.

While Season of Waiting is the first in The Utopia Testament series, the epilogue and sequel hook may feel slightly forced, like it was put in there for the wow factor as opposed to foreshadowing a natural arc for the next book. Despite this, the overall thrill and high quality of Season of Waiting is sure to instill anticipation for Jim Christopher’s next work.

Season of Waiting proves that each decision has a consequence, and each consequence in turn influences a new decision. The events of this book rapidly cascade into one another and will leave the reader reeling. Readers looking for a thrilling page-turner will not be disappointed.