This sequel to Prosper continues the story of four friends as they finish high school and face the next phase of life, navigating the challenges of applying to colleges and deciding what their futures hold while still carrying burdens from their past.

The characterization continues fairly seamlessly from the first book, with all four girls given their own chance to share the story of their senior year. Two years have passed since the events described in Prosper, though, and there are definitely some major changes, some of which are easier to process and understand than others. Readers who go directly from one book to the other might feel a bit confused as they encounter new relationships that weren’t mentioned in the first book, but the author explains the changes effectively, and the book would probably operate just fine as a stand-alone novel.

The character interactions feel more significant and complex this time. The girls each have their own personal struggles, but their boyfriends also have faults, to where the fights they get into feel motivated and nicely nuanced. The characters’ after-school interests are featured in this novel, to where it’s clear there’s more to their lives than just relationships or their family troubles.

Family and friendships continue to be major themes of the series, and it is beautifully handled to where the love the characters have for each other can be clearly seen and felt. The life situations shown in Prosper are continued in this book, to where readers can enjoy the progression and growth the characters are seeing in their relationships with God and with their own self-identities.

While each girl is in a romantic relationship at some point during the book, this is also handled in a believable manner, to where the girls don’t all respond to their boyfriends in exactly the same way. The narration nicely balances a variety of viewpoints on romance, from getting married when only eighteen to not feeling ready for marriage and needing to wait.

The book could use a little editing polish, as there were times when it felt like the wrong word was selected and another word was really what the author wanted. There are a few plot threads that disappear, but some of this may be intentional, leaving room in the series for the third novel. However, it did feel like the character who had faced sexual abuse in the past would struggle in her relationship with her boyfriend a little more, to where her learning to trust someone romantically would be more of a problem. While it shows up in a dream, it never seems to bleed over into the actual relationship, which might seem less realistic.

Each character is committed to her Christianity and takes her problems to God in an effective, unobtrusive way, where the actions and words feel natural instead of preachy. Perfect for readers who enjoy Christian fiction with characters who aren’t perfect but who are still trying their best, this novel provides an empathetic window into the changes and challenges of major life seasons as seen through the eyes of four high school girls. Emotional and heart-felt without feeling contrived, the pacing is believable, creating a gentle story with memorable characters set against a challenging world. 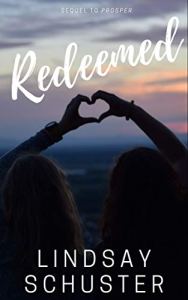 One thought on “Editorial Review – Redeemed”