Title: The Power of With: How the Impossible is Possible!

In The Power of With, Eric learns how one seemingly small word can change everything. This faith-based children’s book draws on a lesson from the Christian Bible to shape its story and its characters. Eric has been feeling sad ever since he lost his dog, Little Bay, and he tells everyone how much he misses her. With the help of Eric’s mom, a local magician, and one special piece of advice, Eric finds peace in letting go of control and having faith in the impossible.

When Eric thinks about Little Bay, he becomes very sad. He doesn’t know where she is, or if she will ever come home. But when Eric has a peculiar dream about Little Bay playing on the beach, it gives him a glimmer hope that she is still out there and will make her way back to him.

A local magician teaches Eric about the Bible verse in Luke 18:27: “The things which are impossible with men are possible with God.” The magician tells Eric that remembering one special word, “with [God],” can make all the difference in navigating hard times. From that moment on, Eric believes Little Bay will come home.

The book follows Eric’s trials and tribulations as he learns important lessons about having faith, surrendering to the unknown, and trusting that everything will work out as it is meant to. The book will teach children how to deal with problems, big, small, and even ones that hurt, with grace.

Though clear in its mission, the story does take some time to find its flow. At times, places and conversations change abruptly. Specifically, there is a sharp transition between the first chapter and the two chapters following, which makes the writing sound a bit disjointed and awkward. Had there been a scene in-between that linked them together, the story would have unfolded more naturally.

One of the book’s key settings is the local circus/fair. Eric visits the circus with his mother where they share laughs and have good fun. The magic tricks and shocking stunts that they see give the book an air of magic, which opens the audience to believe in the unbelievable. These exciting scenes are accompanied by colorful, vibrant, textured illustrations that capture the circus’s most whimsical elements.

The book’s charming illustrations will be a favorite among young readers and parents alike. The illustrations, which are paintings, are captivating and full of rich color. Even the most eager reader will pause to admire the artwork. One of the most memorable images is one that features Eric’s mother, birds, and lots of balloons. This picture is linked to a scene where Eric’s mother tells him about a dream she had.

The simple scene that compares Eric’s mother’s dream to his own adds incredible depth to the story. Readers will learn that having faith in the (seemingly) impossible is important no matter your age. The image perfectly sums up the book’s message and the teachable moment it wants to share with readers.

Imaginative and insightful, The Power of With is perfect for families of the Christian faith, or those who want to share their faith with others. The Power of With features beautiful paintings that bring this children’s story to life. Moore creates a story with a deep message that is clear, concise, and easily digestible for young readers. Eric’s journey to understanding that he never needs to go about life’s troubles alone is one that can encourage parents and empower readers to never lose hope. 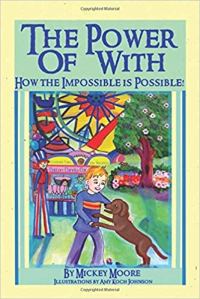