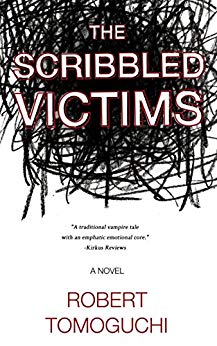 Yelena Solodnikova is a vampire. Jaded by her true love abandoning her years ago, Yelena refuses to grow too attached to anyone, leaving her unable to succumb to her vampiric instincts without feeling ashamed. But when Yelena meets Orly, a twelve-year-old cancer patient with only weeks to live and a curious talent, she sees an opportunity to finally feed with no remorse.

As the unlikely pair’s relationship grows, Yelena realizes that no amount of beauty, money, or blood could satiate her thirst for the one thing she wishes to obtain forever: love.

Yelena’s struggle to decipher what makes a person “good” and what makes them “bad” begins to affect her eating habits–that is, she can never feed off of a human without the imminent feeling of guilt. Desperate to ease the pain of her lost love and her guilt-ridden hunger, Yelena turns to Orly’s unique ability to see the evil and dark histories of people through drawings for help.

The two work together, with Orly finding criminals and evil people the world is better off without, and Yelena doing the dirty work–and finally feeding in peace. Although Orly’s unique talent is intriguing, it’s never fully explained how exactly her scribbling powers work.

Beginning as complete strangers and evolving to a mother-daughter dynamic, Yelena and Orly’s relationship was, despite their bonding over killing people, wholesome and pure. Through this relationship, the book discusses what temporary love is and its limitations, even to those who live forever, in a way that is magical and paranormal, yet emotional and true.

Yelena’s rollercoaster of emotions will evoke the most empathy in readers as she navigates the difficulties in balancing her natural instincts as a vampire, and as a human. Orly was perfectly creepy, mysterious, and cunning, and the character added lightness and comedic effect to the story.

Often unclear where the story is going, readers will never know what to expect from the characters’ wild adventures as they hunt down evil and feed from it. The slow but steady plot is sprinkled with enough action to keep readers on edge throughout as the storyline itself develops.

Unpredictable and dramatic, the climax of the book is so exciting, it was nearly anxiety-inducing, as the characters’ relationships are tested on new levels that risk everything.

The book contains most of the classic vampire tropes, such as needing permission to enter a room, sleeping in a coffin, and burning in the sunlight. These details often translated as clichés and would have worked better had they been accompanied by some original and creative vampire traditions.

The book contains violence, explicit sexual scenes, and language, including references to rape and pedophilia. Because of its adult content, this book is best suited for a mature audience. Unsurprisingly, bloody scenes and consuming blood are also discussed at length.

The Scribbled Victims teaches us how to love ourselves, how to love others, and the difficulties of those who seem incapable of loving face. Tomoguchi’s imaginative creation of a little girl who can use her sight of evil for good will keep readers engaged and attached to these empathetic, emotional characters. Filled with diverse, exciting characters from various walks of life, The Scribbled Victims will satisfy anyone’s cravings for a story about finding the present in forever, light in the dark, and hope in lost love.

One thought on “Editorial Review – The Scribbled Victims”